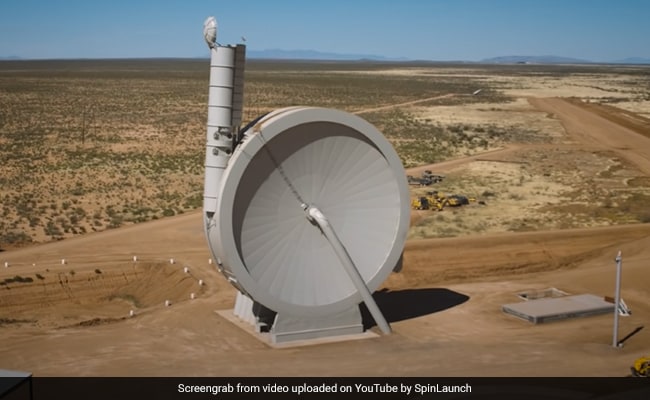 The giant slingshot machine is located in Spaceport America in New Mexico, US.

The US National Aeronautics and Space Administration (NASA) is planning to test an unconventional system later this year for launching small objects to low Earth orbit. According to Space.com, the space agency has signed an agreement with California-based startup SpinLaunch to test its extraordinary whirl ‘n' hurl space launch technology, which accelerates a launch vehicle to hypersonic speeds using an electric centrifuge, hurling it skyward like a space discus.

The system aims to make space launches more affordable and environmentally friendly. For several months now, SpinLaunch has been running tests of its system in the New Mexico desert and it even performed a successful first test in October 2021, flinging a 10-foot-long projectile to an altitude of tens of thousands of feet. In a statement, the company said that its futuristic A-33 Suborbital Mass Accelerator acts just like a "slingshot".

Now, the test flight, which is expected later this year, will provide valuable information to NASA for potential future commercial launch opportunities, SpinLaunch said. The company also stated that the Space Act Agreement is part of NASA's Flight Opportunities Program, which helps demonstrate technologies that could aid the agency's science and exploration portfolios and spur the growth of the private spaceflight industry.

The 'kinetic' launch system, which is seen as a green alternative to fuel-based launches, works by attaching a reusable rocket to a giant rotating arm in an electric vacuum-sealed centrifuge and spinning it at several times the speed of sound. The rocket is then released, following which it shoots to space in order to release payloads such as small satellites into low-Earth orbit.

The giant slingshot machine is located in Spaceport America in New Mexico. It is slightly taller than the Statue of Liberty. While NASA plans to test the extraordinary machine later this year, SpinLaunch aims to launch its first orbital test flights in 2025. According to Space.com, the agreement with NASA is considered an important milestone in the company's journey, said SpinLaunch founder and CEO Jonathan Yaney.