The full results, published Thursday in the journal Science, showed that Scott Kelly experienced numerous physiological and chromosomal changes during his long sojourn in orbit, including changes in gene expression. 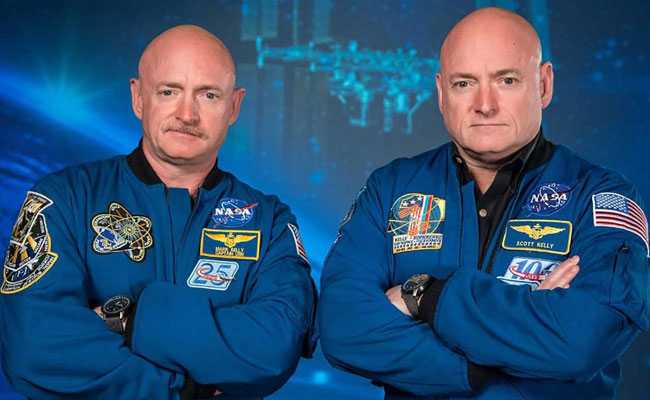 Astronaut Scott Kelly made himself a guinea pig for all the people who dream of human journeys to Mars and other destinations in space. In 2015, Kelly rode a rocket into space and spent nearly a year on the International Space Station in low Earth orbit, while his identical twin brother, Mark Kelly, stayed on Earth's surface for NASA's celebrated "twins study," designed to see what spaceflight does to the human body.

The full results, published Thursday in the journal Science, showed that Scott Kelly experienced numerous physiological and chromosomal changes during his long sojourn in orbit, including changes in gene expression. His immune system went on high alert, both when he went to space and upon returning to Earth. His body acted as if it were under attack.

Mark Kelly served as the comparison subject for the experiment. The retired astronaut is married to former congresswoman Gabby Giffords, a Democrat, and is running for the Democratic nomination for U.S. Senate in Arizona.

The researchers, echoing what NASA has suggested previously, said the twins study turned up no showstoppers - no shocking health consequences that would surely prevent a human mission to Mars or similar long-duration mission. But the report shows anew that the human body is adapted for life on the surface of Earth and goes haywire in zero gravity.

One of the most dramatic findings concerned epigenetics - how genes are turned on or off to produce proteins. (Contrary to some breathless headlines, Scott Kelly didn't undergo a space-induced change in his genetic code.) Gene expression changed in both Kellys during the study but in significantly different ways. The study found that more than 90 percent of Scott Kelly's gene expression changes reverted to normal when he returned to the surface.

His telomeres - structures that protect the ends of chromosomes, much like the plastic caps on the ends of shoelaces, and which erode over time as part of the natural aging process - lengthened in space. But that's no fountain of youth, the study found, because the telomeres shortened dramatically when he returned to Earth.

Months later, he still showed a slightly elevated number of cells with shortened telomeres, possibly an effect of radiation exposure. "He might be at some increased risk for cardiovascular disease or some types of cancer," said Susan Bailey, a biologist at Colorado State University who led one of the investigations in the study.

"Although average telomere length, global gene expression, and microbiome changes returned to near preflight levels within 6 months after return to Earth, increased numbers of short telomeres were observed and expression of some genes was still disrupted," the report states.

The study found certain cognitive deficits during a battery of tests in orbit, which lingered when Scott Kelly later took tests back on Earth.

But in an interview with The Washington Post, Scott Kelly, now 55, said that after landing he suffered flulike symptoms and felt bad for many weeks, and that altered his cognitive performance.

"Imagine going to take the SATs when you have the flu. You probably wouldn't do as well," Kelly said.

Adjusting to life back on the ground was actually harder than adjusting to life in zero gravity, he said. In his memoir, "Endurance," he wrote about suffering from skin rashes, burning sensations and horribly swollen legs as well as nausea in the days after he returned.

"When first up there, I felt crappy because of the fluid shift and the carbon dioxide levels. I can't say I felt a change in my immune system, but I definitely felt not well. But I felt much worse coming back," he told The Post. "The most worrisome symptoms I had, which was swelling in my legs, the rashes, were gone after a couple of weeks. After a month I felt mostly better. I would say it took eight months before I felt completely back to normal."

He said one of the hardest problems he faced was adjusting to an unscheduled existence, in sharp contrast to life on the space station.

"When you get back, you feel a little bit directionless," he said.

The new study points out: "In addition to re-exposure to Earth's gravity, the post-flight period can be demanding for astronauts owing to participation in research studies and media events."

Andrew Feinberg, one of the study co-authors and an epigenetics expert at Johns Hopkins University School of Medicine, cautioned that this research study is limited, focusing on a single pair of twins, and should not be seen as providing universal truths about the human health effects of spaceflight.

"The study sample is two people," Feinberg said. "If you see a difference between these two people, how do you know if what you're looking at is because of the twin on the ground or the twin in space?"

Moreover, Scott Kelly remained in low Earth orbit under the protective shield of the Earth's magnetic field. Interplanetary spaceflight, or journeys to the moon, will expose astronauts to much higher levels of radiation.

"We need to get outside of low Earth orbit, and we need for the astronauts to spend longer periods of time to really evaluate some of these health effects. Radiation exposure will certainly be a very big concern," Bailey said.

Mark Kelly is six minutes older than his brother. But Scott Kelly says he's actually a few milliseconds younger still, due to having spent 500 more days in space than his astronaut brother. Einstein's special theory of relativity leads to a "twins paradox" in which someone moving at a high velocity, such as 17,500 mph in low Earth orbit, ages more slowly than a twin on Earth.

"I look younger than he does," Scott said. "He's busy running for office. His telomeres are going to be way worse than mine. I'm not worried. I'll be on a beach in the Bahamas, and he's going to be hopefully in the U.S. Senate. He's going to age much faster than me."

(Except for the headline, this story has not been edited by NDTV staff and is published from a syndicated feed.)
Comments
NASA Twins StudyEffect Of Spaceflight On Human BodyScott Kelly