The Taiwan Strait, which separates mainland China from the island of Taiwan, has been a geopolitical flashpoint between the two countries. 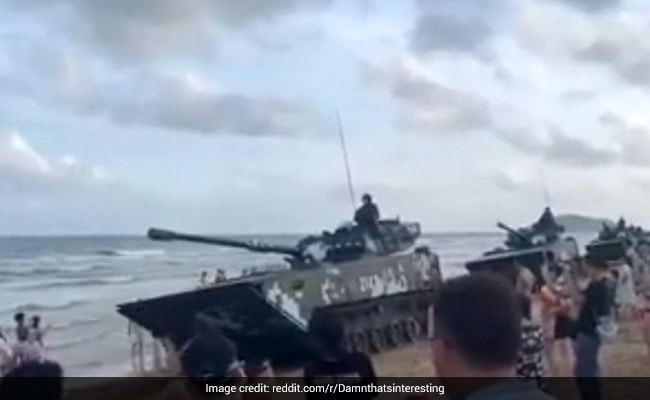 A video showing tanks at a beach in Xiamen city.

Tensions across the Taiwan Strait are high as US House Speaker Nancy Pelosi visits Taiwan. A video going viral on social media shows tanks on the beaches of Xiamen city, which lies just across the strait from Taiwan. The video posted on Reddit shows beachgoers surrounded by a row of tanks that are moving ahead. Xiamen, in China's Fujian province, is just 300 kilometres away from the island of Taiwan. Global Times said in a report that Xiamen Airlines has "adjusted" dozens of its flights citing air traffic control orders.

The footage has received neatly 17,000 upvotes on Reddit since being posted on Tuesday. Users are shocked to see the deployment of such heavy forces, which has turned the region into a geopolitical flashpoint.

"Can you imagine your sand castle being destroyed because of geopolitics?" a Reddit users asked. "The show of force is more for their civilian's than it is for Taiwan," added another.

Also Read | The Taiwan Strait: A History Of Crisis Since 1949

A resident of Xiamen told South China Morning Post (SCMP) that he had seen a few dozen military vehicles of various types roll into the city and head towards its main ring road since Sunday.

Chen Jinhuo, owner of a restaurant, added that "about a hundred" armoured vehicles are parked on the main ring road.

The China Maritime Safety Administration has announced military training in South China Sea waters from Tuesday to Saturday, with entry to the area prohibited.

Taiwan said these military exercises breach the island's territorial waters. "This is an irrational move to challenge the international order," Defence Ministry spokesman Sun Li-fang said at a press conference on Tuesday.

The trip by Ms Pelosi, who is second in line to the presidency and the highest-profile elected US official to visit Taiwan in 25 years, has ignited a diplomatic firestorm.