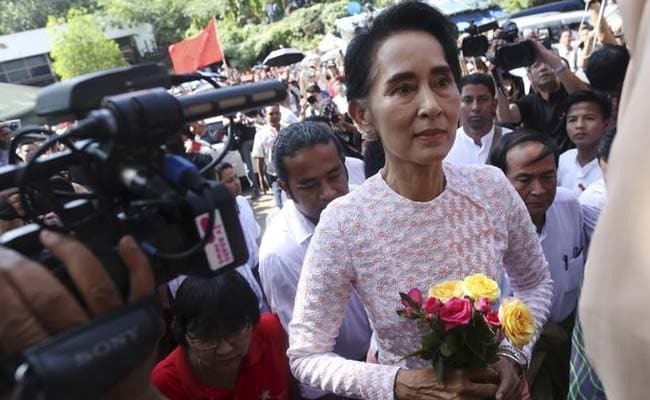 Naypyidaw, Myanmar: Dumped from his parliamentary seat by Myanmar's voters, ruling party lawmaker Saw Hla Tun says he accepts defeat and is ready to help newcomers from Aung San Suu Kyi's pro-democracy movement settle in -- an encouraging sign in a country known for its perfidious politics.

Deflated after their November 8 rout at the hands of Suu Kyi's National League for Democracy (NLD), MPs from the army-backed governing party returned glum-faced to parliament this week for a final lameduck session.

But in Naypyidaw they stuck to the party lines of abiding by the election result and ensuring a smooth and democratic transfer of power after half a century of military control.

He said he is preparing detailed handover notes on the committee's work for his successor - who will likely be an NLD appointee.

"I have left them at the committee office. The files with the draft bills have been arranged in an orderly fashion," he told AFP.

Such confidence-building acts are much-needed in a country wary of the army and its political affiliates.

Suu Kyi and her party are no strangers to double-speak and dirty tricks by the military establishment.

They also won an electoral landslide in 1990 only to see the army annul the result and dig-in for another two decades.

Myanmar has opened at breakneck speed since 2011 when a quasi-civilian government led by former military men took power as the USDP.

"We do feel disappointed," said USDP chairman Htay Oo, who lost his lower house seat in the Irrawaddy Delta to an NLD rival.

"In democracy, the people make the decision. Time will tell whether it is a good one," the retired general told AFP.

Change, but not just yet

The NLD can not officially form a government until next year, making for a nervous months-long wait.

Myanmar's army-drafted constitution, which bars Suu Kyi from becoming president, lays out a protracted transition period between elections and the handover of power, with the current parliament due to sit until at least January.

This has raised concerns of political instability, deadlock or mischief-making by losing lawmakers.

They will continue to vote on legislation -- including a future budget -- that will be inherited by their political rivals.

But if MPs from the USDP have revenge in mind, they are eager not to show it.

President Thein Sein has led the way, swiftly congratulating the NLD and vowing an orderly transition of power.

That in part comes from the scale of the NLD win, claiming around 80 percent of seats.

The USDP even lost most of the capital Naypyidaw, a city built in secret by the former junta, whose lonely 20-lane roads are wide and empty enough to land an aircraft.

"I was so surprised to see the USDP losing here. But I suppose, like me, many government workers voted for the NLD. We also want change," said one civil servant who asked not to be named.

When Myanmar held elections in 2010, the USDP swept the board after the NLD boycotted the flawed vote while its leader Suu Kyi was under house arrest.

Thein Sein, who served as the junta number two before shedding his uniform, then stunned the international community with a series of reforms, releasing many political prisoners, removing draconian censorship and welcoming foreign investment.

Observers say the army carefully choreographed reforms in the years leading to the election, reassured by the strong hand it has dealt itself.

A 2008 charter it wrote ringfences a quarter of parliamentary seats for unelected soldiers.

The document also blocks Suu Kyi's path to the presidency -- because she married and had children with a foreigner.

Suu Kyi's challenge is to keep pace with the expectations of a public desperate for greater freedom and prosperity.

But to keep the army from returning to government, observers say she also has to bind a diverse, violence-prone country together.

In the meantime the USDP says it will regroup.

Maung Oo, another former general to have recently lost his seat, said his party have already held a post-mortem after the disastrous polls.

"We will reform our party at every level to be ready for the next elections in five years," he said.
Comments
Myanmar's votersMyanmarAung San Suu KyiSaw Hla TunMyanmar Lawmakers