United Nations has explicitly called for Myanmar officials to face genocide charges over their campaign against the Rohingya. 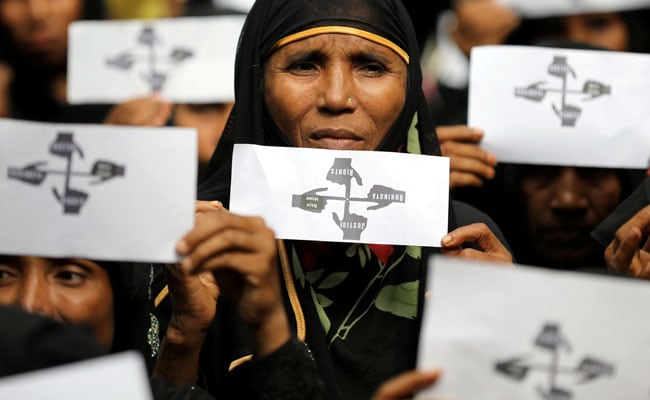 Myanmar's military carried out mass killings and gang rapes of Muslim Rohingya with "genocidal intent", and the commander-in-chief and five generals should be prosecuted for the gravest crimes under international law, United Nations investigators said.

A report by investigators was the first time the United Nations has explicitly called for Myanmar officials to face genocide charges over their campaign against the Rohingya, and is likely to deepen the country's isolation.

The investigators called for the UN Security Council to impose an arms embargo on Myanmar, subject its officials to targeted sanctions and set up an ad hoc tribunal to try suspects or refer them to the International Criminal Court in the Hague.

The report also could serve as a major catalyst for change in how the world's big social media companies handle hate speech in parts of the world where they have limited direct presence but their platforms command huge influence.

The investigators sharply criticised Facebook, which has become Myanmar's dominant social media network despite having no employees there, for letting its platform be used to incite violence and hatred.

Facebook responded on Monday by announcing it was blocking 20 Myanmar officials and organisations found by the UN panel to have "committed or enabled serious human rights abuses".

The company already acknowledged this month that it had been "too slow" to respond to incitement in Myanmar, following a Reuters investigative report into its failure to tackle rampant hate speech including calls for all Rohingya to be killed.

"Our findings are grim," panel chairman Marzuki Darusman told a news conference on Monday. "We believe that establishing the facts is the first stepping stone towards change."Contacted by phone, Myanmar military spokesman Major General Tun Tun Nyi said he could not immediately comment. Zaw Htay, spokesman for Suu Kyi's government, could not immediately be reached for comment. Reuters was also unable to contact the six generals named in the report. The Myanmar government was sent an advance copy of the UN report in line with standard practice.

A year ago, government troops led a brutal crackdown in Myanmar's Rakhine state in response to attacks by the Arakan Rohingya Salvation Army (ARSA) on 30 Myanmar police posts and a military base. Some 700,000 Rohingya fled the crackdown and most are now living in refugee camps in neighbouring Bangladesh.

"The crimes in Rakhine State, and the manner in which they were perpetrated, are similar in nature, gravity and scope to those that have allowed genocidal intent to be established in other contexts," said the UN panel, known as the Independent International Fact-Finding Mission on Myanmar.

The United States, which is preparing its own report on the anti-Rohingya campaign, sees the UN findings adding to growing evidence of "widespread human rights abuses" by Myanmar forces, a State Department spokesman said.

But the US government will only decide whether to call it genocide or crimes against humanity - in line with the UN's determinations - "after a thorough review of the available facts and relevant legal analysis," the spokesman said.

Critics have accused Washington of an overly cautious response to the Rohingya crisis, but a US official, speaking on condition of anonymity, said the UN findings could increase pressure for tougher US action.

Suu Kyi's government has rejected most allegations of atrocities made against the security forces by refugees. It has built transit centres for refugees to return, but UN aid agencies say it is not yet safe for them to do so.

The report said Suu Kyi "has not used her de facto position as Head of Government, nor her moral authority, to stem or prevent the unfolding events, or seek alternative avenues to meet a responsibility to protect the civilian population".

In Brussels, the European Union's executive said it would meet this week with the UN panel and discuss further steps.

Secretary of State Mike Pompeo will use all information at his disposal, including a US report compiled from refugees' accounts but which has yet to be released, to decide how to "advance accountability" in Myanmar, his spokesman said.

Washington this month imposed sanctions on four military and police commanders and two army units but the military chief was spared. New sanctions are under consideration for half a dozen others, US officials have said. But the State Department spokesman declined to specify what "additional tools" the United States would use.

The United Nations defines genocide as acts meant to destroy a national, ethnic, racial or religious group in whole or in part. Such a designation is rare, but has been used in countries including Bosnia, Rwanda and Sudan.

"The scale, brutality and systematic nature of rape and (sexual) violence indicate that they are part of deliberate strategy to intimidate, terrorise or punish the civilian population. They are used as a tactic of war," she said.

The list of generals also included Brigadier-General Aung Aung, commander of the 33rd Light Infantry Division, which oversaw operations in the coastal village of Inn Din where 10 Rohingya captive boys and men were killed.

The incident, for which seven soldiers have since been jailed, was uncovered by two Reuters journalists - Wa Lone, 32, and Kyaw Soe Oo, 28 - who were arrested last December and are being tried on charges of violating Myanmar's Official Secrets Act. The court had been due to deliver a verdict in their case on Monday, but postponed the proceedings until Sept. 3.

Panel member Christopher Sidoti said "the clarity of the chain of command in Myanmar" meant the six generals must be prosecuted, even in the absence of a "smoking gun" piece of evidence to prove who had ordered the crimes.

"We do not have a copy of a direct order that says 'undertake genocide tomorrow please'. But that is the case almost universally when cases of genocide have gone before the courts," Sidoti said.

"Oppression From Birth To Death"

The UN panel, set up last year, interviewed 875 victims and witnesses in Bangladesh and other countries, and analysed documents, videos, photographs and satellite images.

Decades of state-sponsored stigmatisation against Rohingya had resulted in "institutionalised oppression from birth to death", the report said.

The Rohingya, who regard themselves as native to Myanmar's Rakhine state, are widely considered as interlopers by the country's Buddhist majority and are denied citizenship.

Members of the panel had accused Facebook in March of allowing its platform to be used to incite violence. The report said the social media company should have acted quicker.

"Although improved in recent months, Facebook's response has been slow and ineffective. The extent to which Facebook posts and messages have led to real-world discrimination and violence must be independently and thoroughly examined," it said.

"The ethnic violence in Myanmar has been truly horrific. Earlier this month, we shared an update on the steps we're taking to prevent the spread of hate and misinformation on Facebook. While we were too slow to act, we're now making progress - with better technology to identify hate speech, improved reporting tools, and more people to review content."