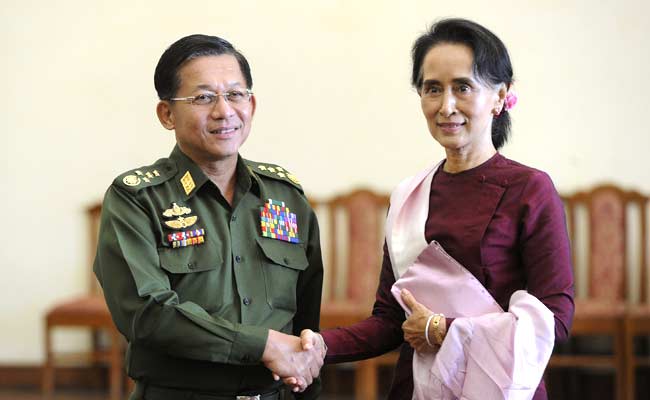 Naypyidaw: Myanmar's opposition was tight-lipped today about talks between leader Aung San Suu Kyi and the country's top general, citing the need for goodwill with its future government partners to ensure a smooth path to office.

Nobel laureate Suu Kyi met on Wednesday with Min Aung Hlaing, the head of a military she must work with in power-sharing executive, despite her party securing an overwhelming public mandate in a November 8 general election.

Her National League for Democracy (NLD) won more than four-fifths of the vote, but a constitution written by the military before it ceded power in 2011 guarantees its nominees get three key cabinet posts and a vice-president position.

The talks were hugely symbolic with the figurehead of a once persecuted pro-democracy movement discussing Myanmar's future with the chief of a military that used an iron fist to monopolise power for five decades.

"We must be, for the time being, tight lipped," senior NLD member Win Htein told Reuters, when asked what they discussed.

"We have been struggling for more than 27 years to reach this stage. We are asking repeatedly, repeatedly to have a dialogue. What happened yesterday, our wish was fulfilled."

Despite the NLD's sweeping win, public doubts linger about the military's government role given its record of political intervention and lucrative network of businesses that could be impacted by future policy shifts.

Complicating that tricky equation is Suu Kyi's intent to change articles of a constitution that not only grants the military a veto on amending it, but excludes her from becoming president due to her sons' foreign citizenship.

Suu Kyi's ties with the generals have warmed since she joined parliament in 2012, but were tested when the NLD gathered 5 million signatures in a petition urging lawmakers to vote to remove the military's legislative veto.

That failed, and she criticised Min Aung Hlaing for interfering in democracy.

Their hour-long talks appeared to be cordial, however, described by a smiling Min Aung Hlaing as "very nice".

Win Htein said the NLD would not rock the boat and had been ordered to keep strategy a secret.

Khin Zaw Win of the Tampadipa Institute think-tank said the gag order was understandable given the NLD's inexperience, but Suu Kyi herself should tread carefully having stirred controversy by announcing a plan to control a nominee president.

"Their leader found it prudent to tell them to keep quiet," he said. "At the same time she is putting the brakes on the MPs but is herself going full swing."
© Thomson Reuters 2015