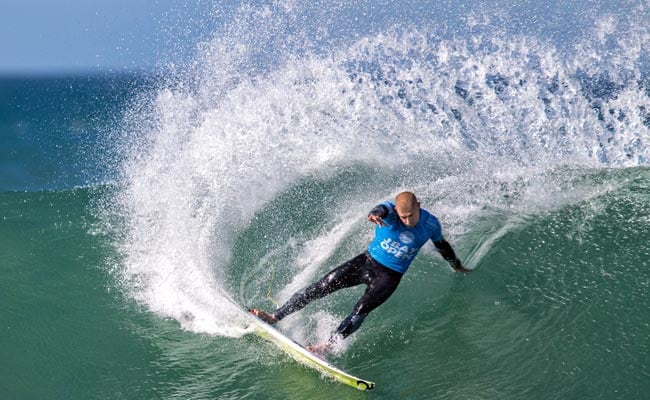 Australian surfer Mick Fanning surfs on July 19, 2015 before being attacked by a shark during the J-Bay Open final in Jeffreys Bay. (Agence France-Presse)

Sydney: The shocked mother of Australian surfing champion Mick Fanning Monday said she thought she had lost another son when a huge shark attacked him during a televised competition in South Africa.

Fanning, 34, was competing in the final heat of a world tour event at Jeffrey's Bay in the country's Eastern Cape province on Sunday when a looming black fin approached him from behind at speed.

In a churn of water and spray, the triple world champion could be seen battling to fend off the shark as it lunged at him during his showdown against fellow Australian Julian Wilson.

Patrol boats and jet-skis charged in as a shark alarm siren was sounded and Fanning desperately swam away waving for help, escaping without injury.

His mother Elizabeth Osborne was watching live on TV in Australia and, shedding tears, told the Australian Broadcasting Corporation that her other son Sean, who died in a car crash almost 17 years ago, was watching over his brother.

"It's the worst thing I've ever seen happen to any of my family because it was just there in front of me," she said.

"When Sean was killed in the car accident, I didn't see it. I saw this just in front of me. It was just terrible."

Osborne described the moment she saw the shark's fin surface behind her son, and the agony of watching him fight for his life.

"I was so scared. I just thought when that wave came through that he'd gone.

"We always say in our family 'We never give up and we never give in'. And he didn't," she added.

"He's such a fighter. I'm just so thankful and so proud of Mick and so grateful to the universe that he didn't have a leg missing."

Fanning said after his near-death experience that the shark "came up and got stuck in my leg rope".

"I was kicking and screaming. I just saw a fin. I didn't see teeth. I was waiting for the teeth to come at me as I was swimming. I punched it in the back."

Surfing is hugely popular Down Under and while shark attacks happen, seven-time world champion Layne Beachley said she had never even seen one during her decades in the water.

"I've been surfing for more than 40 years, I have never seen a shark or been intimidated by a shark; intimidated by dolphins and whales, but not sharks," the Australian told reporters.

The 43-year-old added that despite this all surfers know the risks.

"When we go into this environment we understand that this could potentially happen. That's why they had the boats in the water patrol there to keep them safe. But we have never seen this (in a pro event), this is unprecedented."

Eleven-time world champion Kelly Slater was on the beach when the attack happened.

"Now I have seen it all. It was surreal to me," he was quoted as saying by the ABC.