Vladimir Putin has denied plans to invade, having annexed Crimea in 2014 and backed separatist fighting in eastern Ukraine. 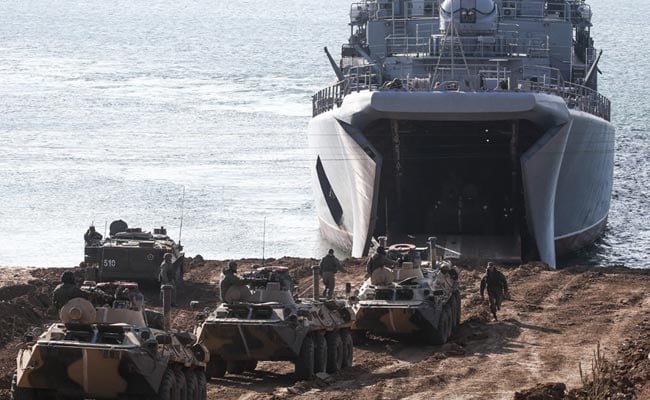 Muddy terrain and the need for more troops on the ground make any large-scale Russian invasion of Ukraine unlikely until January at the earliest, military analysts in Moscow and the West say, creating a window of diplomacy to steer President Vladimir Putin away from a war.

Those judgments come as a combination of open source reports and images gives growing credence to U.S. intelligence assessments of a build-up of soldiers and equipment toward Ukraine's borders. Ukrainian military maps also show the changing distribution of Russian forces.

The U.S. has shared the intelligence and its own maps with some North Atlantic Treaty Organization allies, warning that Russia could be weighing a large-scale incursion. U.S. officials said in their briefings that Putin's intentions remain unknown, but any operation, should he decide to act, would likely involve double the number of battle groups currently in position and could come in the early months of next year.

Putin has denied plans to invade, having annexed Crimea in 2014 and backed separatist fighting in eastern Ukraine.

"In this season you have what we call Rasputitsa, which is mud," said Pavel Felgenhauer, a Moscow-based military analyst for the Jamestown Foundation. Yet for any attack on eastern Ukraine, he said, Russian generals would want to move fast to outflank the main Ukrainian force around the conflict-ridden Donetsk and Lugansk regions, before its soldiers have time to dig in.

"We have to be able to move our tanks and other vehicles off the roads to do that, which in the black earth region down there would be impossible right now. Once the frosts come you can move in any direction you want," Felgenhauer said.

In addition, Russian commanders would want to assemble a similar-sized force to the last major build-up around Ukraine in March this year, according to Felgenhauer. Western analysts estimated that at just above 100,000 soldiers.

An attacking force would normally seek to be two-to-three times the number of troops it expects to meet, according to a former senior U.S. security official who asked not to be named. Judging by the publicly available maps and data, the person said, Putin does not currently have the numbers for a full-scale invasion.

A Nov. 22 Ukrainian military map seen by Bloomberg echoes the U.S. assessment of a renewed build-up near southern and eastern Ukraine. It depicts 43 battle groups, consisting of 94,000 troops in place around Ukraine, compared to 53 battle groups at the end of April. An earlier version of the same map was published by the Military Times.

Not all forces mobilized earlier this year were sent to the Ukrainian border, a pattern likely to be repeated, according to Felgenhauer. There were redeployments across the country, with more than 300,000 troops, 35,000 pieces of heavy equipment, 900 aircraft and 180 warships by his calculations, based on data from the press services of Russian regional commands.

The movements went "all the way to Kamchatka, because they have to be prepared in case this should expand into a more global war." The Kamchatka peninsula sits north of Japan and west of Alaska.

Russia couched its prior mobilization near Ukraine and eventual pullback as part of nationwide readiness drills called by Defense Minister Sergei Shoigu. There has been no such announcement of military exercises this time.

While far from a given, conflict appears more possible now than in previous months or years and -- failing some form of agreement over Ukraine between Washington and Moscow -- is likely to loom over future campaign season windows, even if it doesn't take place this winter, according to Felgenhauer and others.

Against a backdrop of deteriorating relations between Russia and NATO, "there is just a fundamental disagreement about the Minsk 2 agreement," said Andrew Monaghan, a British former adviser to NATO on Russia and Senior Associate Fellow at the Royal United Services Institute, a London think tank. He was referring to the 2015 peace deal that was the culmination of efforts to end heavy fighting the previous year.

"Minsk 2 came about as the result of a Ukrainian defeat on the battlefield," Monaghan said. "From the Russian point of view Ukraine is moving away from what they signed up to, diplomacy is not succeeding and that is why the military is back on the table."

At the same time, Russia has consistently denied its forces took part in the conflict since it started in 2014 and has responded to questions about any current build-up by saying troop movements within Russia are an internal matter. Ukraine sees the Minsk-2 agreement as structured to federalize the country in such a way Moscow would retain a veto over Kyiv's economic and security choices.

Ukraine denies violating the peace accords and says it is seeking to revive mediation by Germany and France on their implementation, which is bogged down. Foreign Minister Dmytro Kuleba in a Tweet on Monday dismissed Russian allegations that Ukraine plans an assault on separatist areas, saying it's "devoted" to seeking political and diplomatic solutions to the conflict.

The Moscow-based Conflict Intelligence Team, an open source intelligence group, says it has tracked significant movements of Russian tanks and other materiel toward Ukraine, using video and other imagery posted online within Russia. "If this pace continues to January," the CIT wrote in a Nov. 24 report, "then the total number of Russian troops near the border and in Crimea would be significantly higher than the April figures."

Ukraine's military has expanded and reorganized since 2014, when it was unable to contain Russia-backed militia that NATO says were reinforced by regular Russian troops. The nation of 44 million now boasts 255,000 active duty personnel, according to the government. The difficulty for Ukraine, says Felgenhauer, is that Russia has greatly expanded its combat-ready force, too.