The incident was probably the first instance in about a year of a mountain lion or a bear entering a residential neighborhood in the region, police Lt. Xavier Torres said. 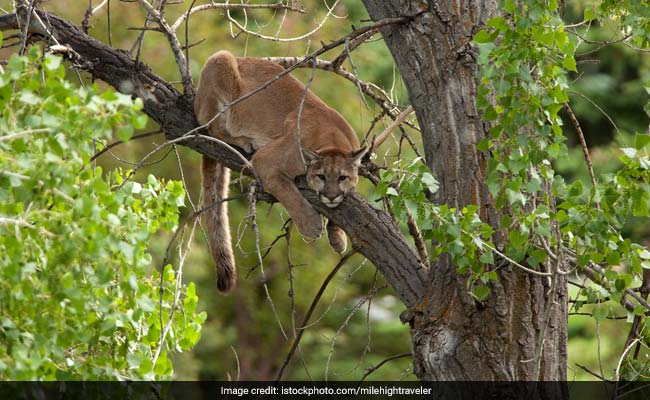 The large lion was first spotted before 7 a.m. in the back yard of a residence. (Representative)

A mountain lion wandered into a Southern California neighborhood Monday morning and prowled around several homes until authorities tranquilized her, scooped her up and drove her away to be assessed before release back into the wild.

The large, half-blind lion was first spotted before 7 a.m. in the back yard of a residence in the 600 block of Virginia Ann Drive in Azusa, California, said Azusa police officer Mike Bires. Azusa is in the foothills of the San Gabriel Mountains, about 25 miles east of Los Angeles.

"We have a large mountain lion to the rear of the residence, and so we wanted to let all of our residents who live up here by the golf course, north of Sierra Madre Avenue, to stay inside their residence, just for safety reasons," Bires said in a live video he posted Monday morning to Twitter and Facebook.

The incident was probably the first instance in about a year of a mountain lion or a bear entering a residential neighborhood in the region, police Lt. Xavier Torres said. Lion or bear sightings occur once or twice a year, he said. The animals usually come to the neighborhoods from the San Gabriels.

Among the first people to see the lion Monday was 65-year-old Deborah Moore, who saw it standing in her front yard as she was walking home from a neighbor's house.

"I was stunned and amazed at the beauty. I didn't feel scared, it didn't seem like it was aggressive," Moore told the Los Angeles Times. Moore was returning from checking on a neighbor's Yorkshire terrier while she was out of town. "We just had a kind of staring contest and I didn't want to take off and have it chase me or something."

She said the lion was about the size of a small horse or pony. The two continued to gaze at each other until an Azusa officer drove up. The officer told Moore to go inside, and the lion, upon seeing the police officer, ran off into Moore's backyard, where it hid in trees and bushes near her spa, according to the Times.

Police monitored the lion's movements with a drone, Torres said. That enabled officers to confirm the lion was still in the back yard.

The drone also allowed officers to track the lion from a safe distance when she eventually hopped a fence and prowled into another back yard, Torres said. She then climbed a shed to leap into the backyard of another home, where she stayed until 8:53 a.m., when officials from the California Department of Fish and Wildlife arrived.

"The mountains are fairly close by, so our plan was to get her to move to an unpopulated area on her own -- by scaring it, by using police cars as barriers to direct it in a certain direction," Torres said. "However, the mountain lion kept staying in the backyard."

Authorities tranquilized the lion and carried it to a truck. They observed that the lion appeared to be blind or injured in one eye, which was completely white. It is unclear when or how the eye injury happened, Torres said.

Authorities plan to assess the lion's health before taking her to a less populated area, where they would wait for her to regain consciousness and release her, Torres said.


(This story has not been edited by NDTV staff and is auto-generated from a syndicated feed.)
Comments
Mountain LionAzusa