A rebellion against Thai rule in the country's culturally distinct "Deep South" bordering Malaysia has left nearly 7,000 dead -- the majority civilians -- since 2004. 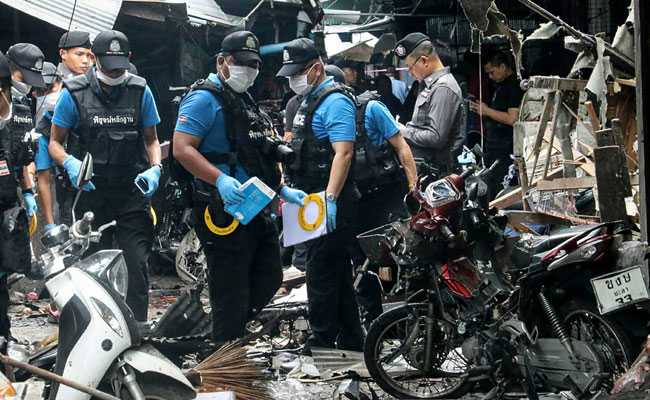 Two of the dead were Buddhists, the other was Muslim.

Yala, Thailand: A motorcycle bomb killed three civilians and wounded two dozen others on Monday at a bustling morning market in Thailand's insurgency-hit south, the first such attack on a "soft target" in the Muslim-majority region for months.

A rebellion against Thai rule in the country's culturally distinct "Deep South" bordering Malaysia has left nearly 7,000 dead, the majority civilians, since 2004.

The death toll in 2017 from the insurgency was 235, the lowest in 13 years of conflict as peace talks edged forwards and the Thai junta boosted its security lockdown on the region.

But Monday's bomb in Yala town at a packed market popular with Buddhists and Muslims may indicate that militants are once more aiming attacks at civilian targets.

"The suspects parked the motorcycle in front of a stall selling pork in downtown Yala... it detonated 10 minutes later," the policeman told AFP, requesting anonymity.

"Three civilians were killed. It's the first big attack in downtown Yala in two years."

Two of the dead were Buddhists -- the other was Muslim -- while 24 people were wounded, according to an official at Yala hospital.

It was not immediately clear if the bomb deliberately targeted the pork stall, and potentially its Buddhist customers.

An army spokesman for the region confirmed the toll and blamed "insurgents", saying the motorbike laden with explosives fits their modus operandi.

But later the regional army chief instead blamed "powerful local families" intent on disrupting the peace for financial gain -- without naming his chief suspects.

- 'Sign of things to come?' -
Thailand, which colonised the ethnically Malay south roughly a century ago, has for decades been confronted by fighters seeking more autonomy, but the conflict flared up into its bloodiest phase in 2004.

Rights groups have accused both the insurgents and security forces of widespread human rights abuses, with civilians trapped between the two sides.

The shadowy network of militants almost never claim attacks and rarely talk to the media.

Their cells, which operate from remote communities and the forested Malaysia border zone, had in recent months stepped back from targeting civilians including teachers and other perceived collaborators with the Thai state.

Talks between the Thai state and an umbrella group claiming to represent the rebels have rumbled on inconclusively for years.

But the recent slackening of violence had been read as a sign of confidence building between the sides -- although the main rebel group the Barisan Revolusi Nasional (BRN) has disowned the discussions.

Monday's attack could mark a dangerous new shift in tactics.

"If it was the work of the insurgents, then it's a sign of things to come -- a stern message to the authorities that they will resort to hitting soft targets."

Pathan speculated the market blast could also be "retaliation" for a specific incident in a conflict defined by tit-for-tat operations by insurgents and security forces.

Promoted
Listen to the latest songs, only on JioSaavn.com
Last May a large car bomb struck a supermarket in neighbouring Pattani province wounding scores of people.