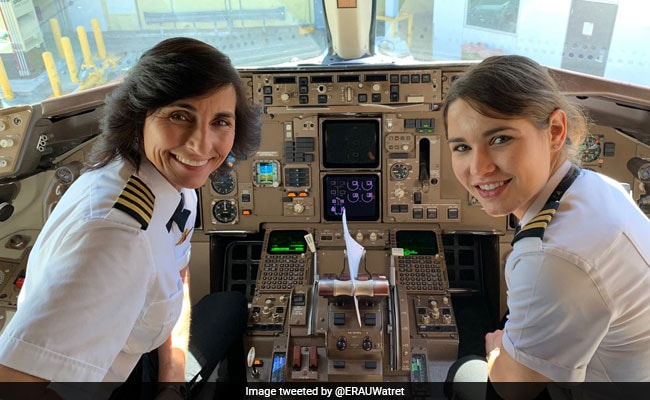 Twiteratti called the picture "goals" and praised the mother-daughter duo.

A mother-daughter duo co-piloting a Delta Airlines plane in USA have won hearts on the Internet after their picture on the flight found its place on social media.

The inspiring story of the pilots was shared on Twitter by John R. Watret, a pilot and the Chancellor of Embry-Riddle Aeronautical University, who called the experience "awesome".

Twiteratti called the picture "goals" and praised the mother-daughter duo.

Take a look at a few reactions:

That's just awesome. Thanks for sharing!

My Sunday morning smile, thank you.

How about a big congratulations for a mother daughter team! Thats a great accomplishment, I don recall many parent decendant ( is that politically correct enough) flight crews
Have tons of fun the both of you and a great career to both of them.

However, some users were not too impressed and said the picture should have been captioned "parent-child" duo and also raised concerns over family members co-piloting.

Gender never played a role in my decision to retweet this but rather that it was parent/child crew. You made it about gender.

Very happy to hear different generations and all women flight decks - about time. However, I've noticed recently this post and others promoting 'same family' crew. Isn't this a professional no no? I thought it would compromise safety.

The pilot who shared the picture called it inspiring for young women in another tweet. It sure is inspirational for all women and female pilots with just a tiny percentage of them in the world.