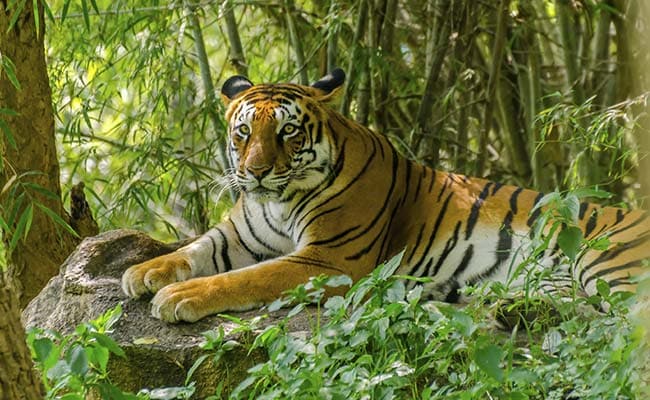 The Wildlife Protection Society of India released its quarterly poaching toll data and revealed that more tigers - 28 - have been killed throughout India in the first quarter of this year. (Representational Image)

In the year 1900, there may have been as many or more than 100,000 tigers roaming this planet's forests. And every year since then until now, that number has decreased. But a combination of better and broader monitoring techniques and, governments say, increased vigilance against poachers has led to the first increase in tiger numbers in over a century - to 3,890 this year. Some of the biggest increases were in India, which, in its latest tiger census, claimed a 30 percent population increase in the past four years to 2,226, almost three-quarters of the global total.

But ever since the numbers were released earlier in April, the scientific community has sought to dampen what it has seen as the Indian government's self-congratulation. "All of this tom-tomming and arm-waving, claiming we've had stupendous success, is ridiculous and unscientific," tiger expert K. Ullas Karanth, science director for the Wildlife Conservation Society in Asia, told the Associated Press.

The steep growth figure is widely seen as implausible. Tiger populations may be experiencing a small rebound from historic lows, but a good deal of the increase is surely attributable to simply missing fewer animals in their counting, experts say.

"I'd prefer to say there are 30 percent more known tigers rather than say there is actually an increase in tigers. We might not have counted them all earlier," Anurag Danda of the World Wildlife Fund, one of many groups that participated in the census, told the AP.

And this week, the Wildlife Protection Society of India released its quarterly poaching toll data and revealed that more tigers - 28 - have been killed throughout India in the first quarter of this year than all of last year - 25. Altogether, 58 have died, including from natural causes, infighting among the tigers themselves and killings by people in self-defense. The maximum sentence for poaching in India is three years, though one state, Maharashtra, famously decided it would allow park rangers to shoot poachers on sight without repercussion.

To be sure, conservation efforts, some spearheaded by governments such as India's, are the reason we still have any tigers to speak of today. And the international conservation community's goal, set in 2010, to double the tiger population by 2022 is regarded by the community as a challenge but a doable one. South Asian countries are leading that effort, and Russia has seen a population rebound, too. Cambodia, on the other hand, declared tigers extinct within its borders earlier this month.

The challenges include a 40 percent habitat loss in just the past decade and the persistence of a market for tiger body parts that fuels poaching. There is also the need to continue to improve monitoring techniques; cameras and spoor sightings (droppings and footprints) inform most surveys, and census numbers are then extrapolated from those samples. Such improvements are necessary if only because industrial development interests may point to the wrongly inflated numbers as a success and lobby for a relaxing of regulations.