In Pope's Christmas Greeting, A Message Seen For Donald Trump

Pope Francis spoke of the Middle East conflict and other world flashpoints in his "Urbi et Orbi" (to the city and the world) address, four days after more than 120 countries backed a U.N. resolution urging the United States to reverse its decision on Jerusalem. 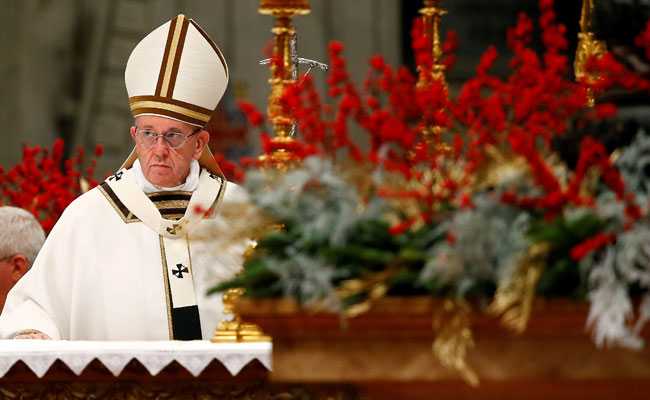 VATICAN CITY: Pope Francis used his Christmas message on Monday to call for a negotiated two-state solution to end the Israeli-Palestinian conflict, after U.S. President Donald Trump stoked regional tensions with his recognition of Jerusalem as Israel's capital.

Francis spoke of the Middle East conflict and other world flashpoints in his "Urbi et Orbi" (to the city and the world) address, four days after more than 120 countries backed a U.N. resolution urging the United States to reverse its decision on Jerusalem.

"Let us pray that the will to resume dialogue may prevail between the parties and that a negotiated solution can finally be reached, one that would allow the peaceful coexistence of two states within mutually agreed and internationally recognised borders," he said, referring to the Israelis and Palestinians.

"We see Jesus in the children of the Middle East who continue to suffer because of growing tensions between Israelis and Palestinians," he said in his address, delivered from the balcony of St. Peter's Basilica to tens of thousands of people.

It was the second time that the pope has spoken out publicly about Jerusalem since Trump's decision on Dec. 6. On that day, Francis called for the city's "status quo" to be respected, lest new tensions in the Middle East further inflame world conflicts.

Palestinians want East Jerusalem as the capital of their future independent state, whereas Israel has declared the whole city to be its "united and eternal" capital.

Francis, leader of the world's 1.2 billion Roman Catholics, urged people to see the defenceless baby Jesus in the children who suffer the most from war, migration and natural calamities caused by man today.

"Today, as the winds of war are blowing in our world ... Christmas invites us to focus on the sign of the child and to recognise him in the faces of little children, especially those for whom, like Jesus, 'there is no place in the inn,'" he said.

Francis, celebrating the fifth Christmas of his pontificate, said he had seen Jesus in the children he met during his recent trip to Myanmar and Bangladesh, and he called for adequate protection of the dignity of minority groups in that region.

More than 600,000 Muslim Rohingya people have fled mainly Buddhist Myanmar to Bangladesh in recent months. The pope had to tread a delicate diplomatic line during his visit, avoiding the word "Rohingya" while in Myanmar, which does not recognise them as a minority group, though he used the term when in Bangladesh.

"Jesus knows well the pain of not being welcomed and how hard it is not to have a place to lay one's head. May our hearts not be closed as they were in the homes of Bethlehem," he said.

He also urged the world to see Jesus in the innocent children suffering from wars in Syria and Iraq and also in Yemen, complaining that its people had been "largely forgotten, with serious humanitarian implications for its people, who suffer from hunger and the spread of diseases".

At his Christmas Eve Mass in St. Peter's Basilica on Sunday, Francis strongly defended immigrants, comparing them to Mary and Joseph finding no place to stay in Bethlehem and saying faith demands that foreigners be welcomed.

Promoted
Listen to the latest songs, only on JioSaavn.com
(Reporting By Philip Pullella; Editing by Gareth Jones)
© Thomson Reuters 2017