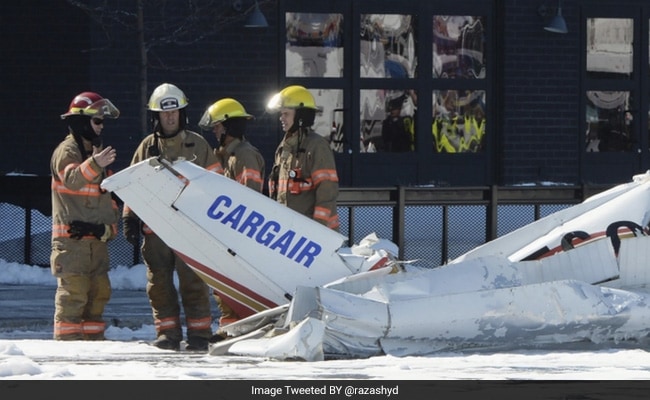 The two planes were Cessna 152 aircraft belonging to the nearby Cargair flight school.

One of the planes crashed into the roof of the Promenades Saint-Bruno mall -- about 20 kilometers (12.4 miles) east of Montreal -- while the other fell into the parking lot, 20 meters (65.6 feet) from one of the main entrances.

One of the pilots was killed and the other was seriously injured, said police spokeswoman Nancy Colagiacomo.

The two planes were Cessna 152 aircraft belonging to the nearby Cargair flight school, said Canada's transport safety authority, which has opened an investigation.

The cause of the accident, which happened in sunny, still skies over one of the largest malls in the area, was not yet known.

In an extract of conversations between the control tower and the pilots, obtained by the TVA network, the controller asks one of them to turn left "to avoid traffic."

"Are you listening?" repeats the controller to the pilot, telling him he is only 800 meters from the other plane.

Promoted
Listen to the latest songs, only on JioSaavn.com
The two planes were heading for Saint-Hubert airport -- where the Cargair flight school is also based -- less than 400 meters as the crow flies from the shopping center.