During her first White House Christmas in 2017, she'd lined that colonnade with abundant sprays of white branches, which could have been seen as a winter wonderland 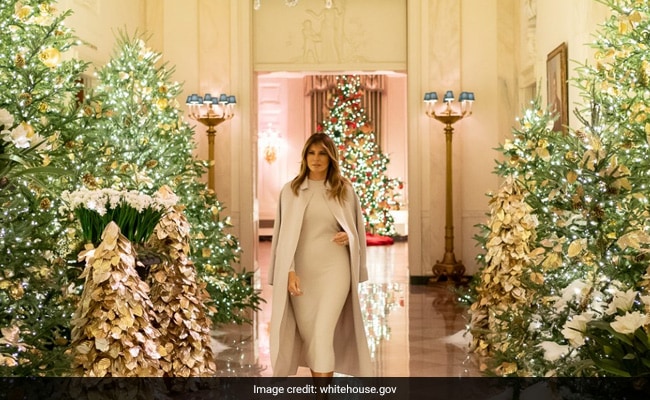 This Christmas season I want to honor those who have shaped our country: Melania Trump

Melania Trump's theme for this year's White House Christmas decorations was "The Spirit of America," and judging from the display at the traditional press preview this morning, that spirit is monochromatic.

White paper stars hung from the ceiling of the East Colonnade, a passageway that had been transformed by clear and white arches, and lined with clear plastic panels printed with white line drawings of more than 60 examples of American architecture and innovation. They sprung from the ground like an austere garden of blueprints.

They were the least controversial decorations to adorn the colonnade in the first lady's tenure as Christmas-decorator-in-chief.

Trump did not show up for photo ops, as she did in 2017, when the lavish presentation also included ballet dancers twirling to The Nutcracker Suite played by the Marine Band. Instead, as she's done before, she released a video of herself filmed during her final walk-through on Sunday after returning from Thanksgiving in Palm Beach, Florida. In it, she's looking at an advent calendar that was in the shape of the White House, adjusting ribbons, and sprinkling fake snow on trees in the Grand Foyer and Cross Hall, which was filled with evergreens covered in white lights or gold paint.

Gone from the colonnade were last year's ("creepy" or chic, depending on who you asked) blood red trees made of branches of cranberries. Trump's critics had said they looked like they were straight out of The Handmaid's Tale or The Shining.

"A lot of people said it looks like Christmas in hell," said Jimmy Fallon in a monologue last year. "Then Melania said, 'Exactly.' "

Seth Meyers satirically reported that the first lady had done all the decorating herself, including trees that lit up to read, "Save me."

"We are in [the] 21st century and everybody has a different taste. I think they look fantastic," the first lady said with a laugh in rebuttal during a 2018 appearance a Liberty University in Virginia. "I hope everybody will come over and visit it. In real life they look even more beautiful."

During her first White House Christmas in 2017, she'd lined that colonnade with abundant sprays of white branches, which could have been seen as a winter wonderland - or, when lit from below, a gathering of skeletons. As Stephen Colbert put it then, "Gahh, what holiday is that for? St. Gorlon's Feast of Human Bones?"

Whatever tastes viewers have, the first lady's devotion to Christmas decorating cannot be quibbled with.

This year she began preparations as early as July, according to an Instagram post that showed her looking at an array of flowers and fabric swatches. This is within the normal holiday decor preparation time for first ladies, but most other first ladies have not trumpeted that fact. The Trumps have also had fewer state dinners than their predecessors so the Christmas decorations also had many state dinners to decorate during their first three years, while the Trump stand out as the preeminent expressions of Melania Trump's tastes.

Those tastes this time around proved to be pretty and polished, if saying very little beyond generalizations about patriotism.

The decor was meant to be "a tribute to the traditions, customs, and history that make our Nation great," according to a press release.

"This Christmas season I want to honor those who have shaped our country and made it the place we are proud to call home," the first lady said in a quote she'd provided. "When I travel the country, I am inspired by the hard working people and families that I meet. No matter which state they call home, many Americans share a strong set of values and deep appreciation for the traditions and history of our great nation."

Trump also thanked the more than 225 volunteers from all 50 states who'd done the decorating, called the White House "the People's House," and wished everyone a Merry Christmas and a Happy New Year.

(One of President Trump's campaign promises had been to celebrate Christmas proudly and eschew politically correct expressions like "season's greetings" and "happy holidays.")

There was a tree at the entrance of the East Wing decorated with gold stars that had been placed on it by members of Gold Star families, who have lost an immediate relative in military service. The official Christmas tree, an 18.5-foot Douglas fir from a farm in Pennsylvania, that Trump had welcomed to the White House as part of another tradition last week, reached to the ceiling of the Blue Room and had the name and floral emblem of each state scattered throughout its branches.

A feast of fake food, including a glistening turkey and a plate of realistic-looking green beans, sat atop a table in the China Room, "illustrating the joys of family coming together at the holidays," according to the press release.

Gilded eagles topped some of the 58 Christmas trees, and elsewhere, in the Red Room, there were trees made out of playing cards that had the first lady and the president's seals, as well as their signatures, as an homage to childhood games played at this time of year.

An ornament spelled out "Be Best" in scrabble letters, a nod to Trump's signature platform, which has three, rather vague aims, revolving around "well-being," online safety, and raising awareness about opioid abuse.

Trump's decor seemed to veer from previous first ladies, who often had a homespun approach. Michelle Obama's gingerbread White House often had a replica of the family dog, B0. Melania Trump's was an homage to great American monuments like the Golden Gate Bridge, Mount Rushmore and the Gateway Arch in St. Louis, made of 200 pounds of gingerbread, and lots of royal icing by the White House pastry team.

The first lady did again have her signature wreaths, greenery with red bow, hung from every window in the White House - including those on the gingerbread White House. And for the family's ornament she chose a metal American flag, that looked as if it was rippling in the wind.

(Except for the headline, this story has not been edited by NDTV staff and is published from a syndicated feed.)
Comments
Melania Trumpchristmas decorationsMelania in White house