Russian Media Worker Marina Ovsyannikova Detained: "Marina has been detained," a post on her Telegram channel said, beneath images of two police officers leading her towards a white van. 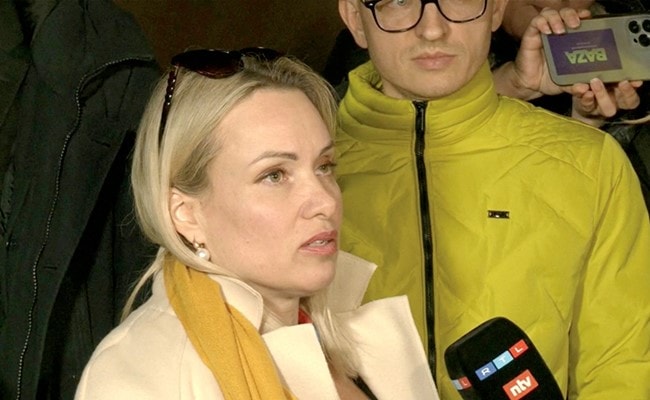 Russian media worker Marina Ovsyannikova, who staged a protest against the invasion of Ukraine on live state television in March, was briefly detained in Moscow on Sunday, posts on her social media channels showed.

"Marina has been detained," a post on her Telegram channel said, beneath images of two police officers leading her towards a white van.

Shortly after, Ovsyannikova posted images of herself and two dogs on her Facebook page.

"Went for a walk with the dogs, just stepped outside the gate, people in uniform approached me," she wrote. "Now I'm sitting in Krasnoselsky ministry of internal affairs," referring to a police station in a Moscow district.

Three hours later, Ovsyannikova said she had been released. "I'm home. Everything is okay," she wrote on her Facebook page. "But now I know it's always best to bring a suitcase and passport if you go out."

Ovsyannikova gained famed in March after bursting into a studio of Russian state TV, her then employer, to denounce the Ukraine war during a live news bulletin.

She was fined after being found guilty of flouting protest laws.

Her brief detention on Sunday followed July 15 social media posts in which she is seen with a poster calling Russian President Vladimir Putin a murderer and his soldiers fascists. "How many more children must die before you will stop?" the poster read.

German media outlet Welt hired Ovsyannikova as a correspondent in April. She returned to Russia earlier this month, writing on Facebook that she was forced to return to defend her parental rights in court against her husband.