March in Ferguson on Eve of First Anniversary of Brown's Death 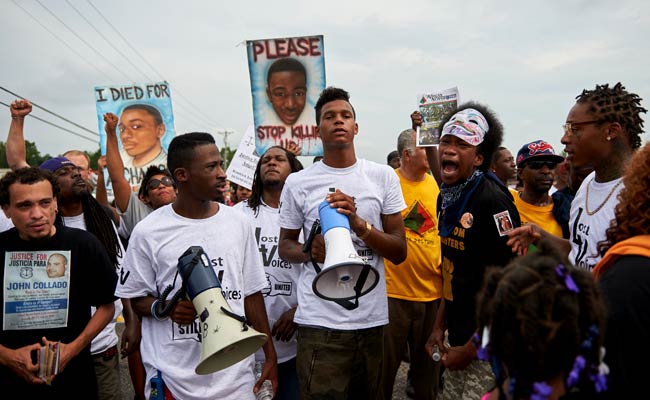 The first anniversary of the shooting of Michael Brown saw protest marches in Ferguson. (Agence France-Presse)

Ferguson: Several hundred people commemorating the police shooting of unarmed black teen Michael Brown marched Saturday on the eve of the first anniversary of his death, which shined a spotlight on race relations in America.

Led by Brown's father, also named Michael, and the rest of his family, the crowd worked its way along one of the avenues hit by fierce rioting last November when a court decided not to indict the white officer who shot 18-year-old Brown.

Saturday's rally was peaceful and boisterous, with a children's marching band bringing up the rear of the parade. A large contingent of police was on hand.

Marchers shouted slogans such as "Hands up, don't shoot" and "We do this for who? We do this for Mike Brown." The procession concluded at Normandy High School, which Brown attended.

Brown Sr. told reporters he was working hard at "keeping my son's life still around."

That means helping families and young people, he said, "whatever I can do to empower us as a people."

Asked what has changed in America's tortured race relations over the past year, Brown said: "Nothing, for me. Some families got justice through Michael Brown's legacy, and that helped them. But I'm still trying to get through."

Among the main events Sunday, marchers will observe silence for 4.5 minutes. That is because Brown's body lay facedown in the street for around four and a half hours after the shooting, until it was taken away.

They will also stage a silent march to a church and hold a religious service.

The riots that erupted in Ferguson spread to other US cities and energized debate on how white police in America treat blacks, especially young black men, particularly when it comes to the use of lethal force.

A string of police killings of black suspects since the shooting has triggered an outpouring of anger at perceived police racism and prompted calls for change.