"March For Our Lives": At Gun Control Rally In Parkland, Grief Is Transformed Into Hope

The marches in Washington and across the US were spearheaded by survivors of the Parkland shooting, many of whom were in the nation's capital on Saturday. 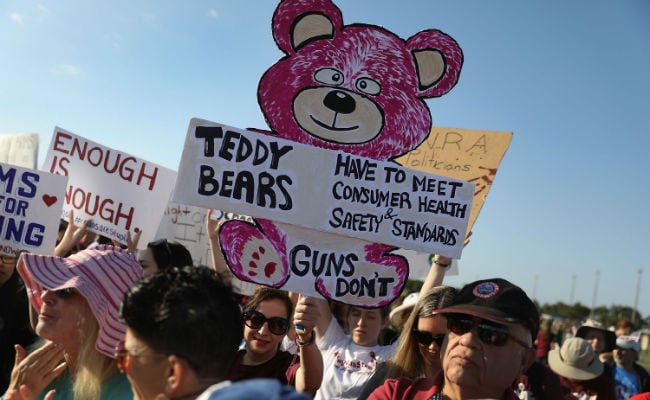 People participate in the March For Our Lives event at Pine Trails Park in Parkland, Florida

Parkland, United States: A little over a month after a school shooting killed 17 people in Parkland, Florida, hopeful locals gathered on Saturday to demand change.

Carrying signs with slogans such as "Love people more than assault weapons" and "Take away your guns not our lives," they joined hundreds of thousands of people around the US taking part in "March for Our Lives" events to call for stricter gun regulations.

The protesters met at Parkland's Pine Trails Park, the same place where a somber vigil was held in the wake of the February 14 attack at Marjory Stoneman Douglas High School.

But this time, the mood was different.

"The vigil was a night of mourning and this day is an active day," Kuishawn Cole, a 17-year-old Stoneman Douglas student, told AFP.

"This day is to say, 'Yes, we are sad but we are doing something about it,' to not be another statistic or victim,'" Cole said.

The event started with the screening of a video from the movement's leaders, sending love and good wishes to their classmates in Parkland.

That was followed by speeches from parents, teachers and survivors of the attack, among them organizer Casey Sherman.

"Those 17 people did not die in vain. They are the force and spirit that drives this movement," 17-year-old Sherman said.

"We are here because we know we can make a change... Our voices do matter."

From 'heartbroken to energized'

Sitting on the grass, three youngsters with hearts painted on their cheeks held a sign reading "Never Again."

Nearby, a man displayed a banner that said: "The only thing easier to buy than a gun is a congressman," an apparent reference to donations that the powerful National Rifle Association gun lobby gives to politicians in exchange for support.

Elyse Brunt, 59, said people have gone from "heartbroken to energized."

"I think what changed is the knowledge that we can make a change together, and we are not going to let other people step on us. That we are going to all step up and make a difference. We have the power of change," the elementary school teacher said.

Another teacher, 69-year-old Linda Fisher, remembered the fights for gay marriage and abortion, drawing from them hope that gun policy change could too come about.

"Popular opinion has changed the government in the past and I'm hopeful that the popular opinion that was initiated by the kids is going to make a difference here," she said.

Promoted
Listen to the latest songs, only on JioSaavn.com
The marches in Washington and across the US were spearheaded by survivors of the Parkland shooting, many of whom were in the nation's capital on Saturday.

They are demanding tighter controls on the sales of weapons, especially assault rifles, and directing their fury toward the NRA and politicians who have failed to enact meaningful legislation to address rampant gun violence that kills 30,000 people per year in the US.
Comments
March For Our LivesParkland