Because Jessica Anderson ran wearing medical scrubs, and not a dress, she did not qualify as a record-breaker. 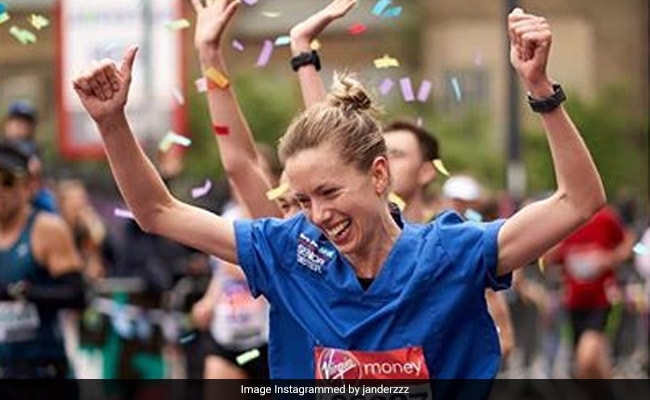 Jessica Anderson trained for London marathon to complete the race dressed as a nurse. (File)

Jessica Anderson trained for the London marathon with a goal: she wanted to be the fastest female to complete the race dressed as a nurse.

Breaking the Guinness World Record was "a challenge but not totally out of reach," Anderson said, and on Sunday, she accomplished the feat - passing the marathon finish line 22 seconds faster than the three-hour, eight-minute and 54-second record.

But her timing wasn't enough to take the title, according to Guinness World Records, whose criteria for a nurse's uniform is based on mid-20th century stereotypes.

Because Anderson ran wearing medical scrubs, and not a dress, she did not qualify as a record-breaker.

In February, Anderson, a nurse at Royal London Hospital for seven years, applied to be considered for the competition. Per Guinness guidelines, she attached photos of her proposed marathon outfit - the uniform she wears daily: a blue scrub top and trousers.

Anderson was "quite shocked" to learn her application had been rejected because her outfit "didn't meet their criteria." Guinness guidelines specified "a white or blue dress, pinafore apron and white cap," Anderson told The Washington Post. (Pantyhose were optional.)

"That didn't feel right to me," she said. "After that it was too late to resubmit, but I didn't want to change my outfit anyway."

Although the submission deadline had passed, she also wrote Guinness officials.

In just over a month I will be running the London marathon in full nursing uniform to raise funds for https://t.co/2hoitqJa1c

Guinness world records have declined my application as my uniform... https://t.co/R8BspC3gab

In a letter viewed by The Post, dated Feb. 19, the Royal London Hospital nurse called the criteria "outdated and frankly quite sexist."

"This is my actual nursing uniform which I wear to work and it baffles me that it doesn't qualify as a costume for an attempt at 'fastest marathon in a nurse's uniform,'" she wrote, asking to be directed to whomever was in the position to review the uniform criteria.

In a message to Anderson, reviewed by The Post, a Guinness official explained that her attire bore too many similarities to Guinness requirements for "fastest marathon dressed as a doctor" (which included scrubs, a white coat and stethoscope). Without the "old fashioned, stereotypical attire," Guinness worried the nurse's costume might not be properly differentiated from the doctor's.

The official also drew on other categories as a comparison: "Marathons dressed as a brownie or scout," which also require "older fashioned costumes" and not the modern clothes worn by the scouting community, and marathons dressed as a chef, requiring "a chef's hat to be worn and a large pot to be carried whereas a number of chefs do not wear hats at all."

The note also clarified that the nurse's dress and apron requirement was same for men and women who competed as nurses.

Anderson, who works in the Acute Admissions Unit and ran to raise money for her ward, called the uniform criteria "outdated."

"I've certainly never seen a male nurse wearing a dress to work," she said in an interview with Runner's World, adding that most nurses at her hospital wear scrubs, tunics or trousers.

Anderson asked Guinness to reconsider her application and was denied a second time. Still, she ran the marathon on Sunday, and - with or without the Guinness accolade - broke the record for fastest time wearing scrubs.

Although Guinness has not given Anderson the fastest-female title, the company appears to have taken her demand to heart. Rather than reinforcing gender stereotypes, it has committed to reevaluating its criteria.

In a statement provided to The Post on Sunday, Guinness World Records said: "Inclusiveness and respect are values that Guinness World Records holds extremely dear and while we always need to ensure we can differentiate between categories, it is quite clear that this record title is long over due a review which we will conduct as a priority in the coming days."

Anderson is pleased that her run has triggered a discussion, she told The Post, but she credits any change in Guinness rules to the outpouring of public support she has received.

"Everyone from student nurses to the chief nursing officers have joined in," she said. "They've done a selfie wearing their uniform with the hashtag #whatnurseswear."

(Except for the headline, this story has not been edited by NDTV staff and is published from a syndicated feed.)
Comments
London Marathon