David Rush is a serial record breaker and so far he has broken more than 250 Guinness World Records. 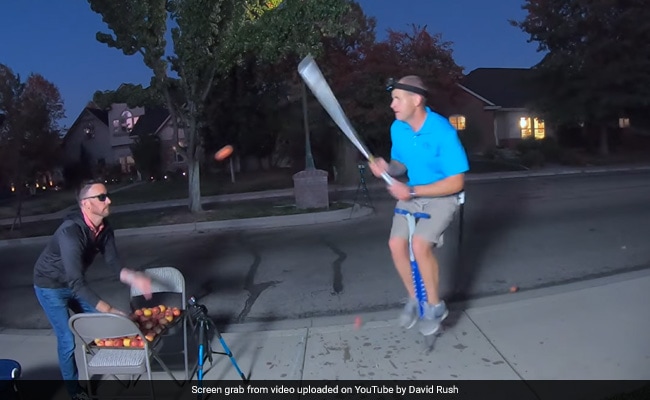 A man from Idaho, US has broken a Guinness World Record by chopping through 56 apples in one minute while bouncing on a pogo stick. He used his samurai sword to slice through the airborne apples.

David Rush is a serial record breaker and so far he has broken more than 250 Guinness World Records to promote STEM (Science, Technology, Engineering, and Mathematics) education.

A video posted by Mr Rush on his Youtube channel shows his neighbour, Jonathan Hannon throwing 74 apples in a minute. Out of which Mr Rush managed to slice 56 apples.

Mr Rush revealed that the most difficult part of the challenge was bouncing on a pogo stick without using his hands.

Mr Rush mentioned on his website, "I was under time pressure since the neighbour's crab apple tree was going to lose all its apples for the winter and there was no way I wanted to waste that much money and/or food on store-bought apples."

He revealed that after a couple of failed attempts, he finally completed a minute without falling off the pogo stick.

He has also broken a record by holding 150 lit candles in his mouth for 30 seconds. "Only 5 seconds in I could feel them slipping out so I had to clamp down even harder and bite in with my teeth to keep them from falling out," he added.

Mr Rush also stated that despite wearing eye protection during the effort, he had to cope with toxic fumes and the candles getting slippery due to his saliva.