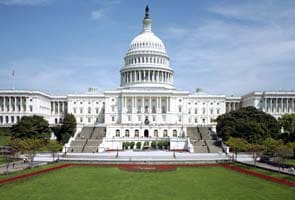 Washington: A 29-year-old Moroccan man who believed he was working with Al-Qaida was arrested Friday near the U.S. Capitol as he was planning to detonate what he thought was a suicide vest that undercover operatives gave him, officials said.

Amine El Khalifi of Alexandria, Virginia, was taken into custody with a gun that didn't work and inert explosives, according to a counterterrorism official. He arrived near the Capitol in a van with the two undercover operatives, and walked toward the building, according to court papers. He was arrested before he left the parking garage.

El Khalifi made a brief appearance on Friday afternoon in federal court in Alexandria, where a judge set a bail hearing for Wednesday. After his arrest, FBI agents raided a red brick home in Arlington, Virginia. A police car blocked the entrance.

A criminal complaint charges him with knowingly and unlawfully attempting to use a weapon of mass destruction against property that is owned and used by the United States. The charge carries a maximum penalty of life in prison.

El Khalifi, who was under constant surveillance, expressed interest in killing at least 30 people and considered targeting a building in Alexandria and a restaurant, synagogue and a place where military personnel gather in Washington before he settled on the Capitol after canvassing that area a couple of times, the counterterrorism official said. During the investigation, El Khalifi went with undercover operatives in January to a quarry in West Virginia to practice detonating explosives, according to court documents.

He believed he was working with an Al-Qaida operative on the plot, according to an affidavit.
El Khalifi came to the U.S. when he was 16 years old and is unemployed and not believed to be associated with Al-Qaida. He had been under investigation for about a year and had overstayed his visitor visa, which expired in 1999, making him in the country illegally, according to court documents.

He told acquaintances in January 2011 that he agreed the "war on terrorism" was a "war on Muslims" and that they needed to be ready for war, the affidavit said.

Before settling on a plot to conduct a suicide bombing in the Capitol, El Khalifi considered blowing up an office building in Alexandria, where military officials worked and a restaurant in Washington to target military officials who gathered there. He even purchased supplies that included nails for the operation, according to the affidavit.

Later, when he settled on bombing the Capitol, El Khalifi asked his associates for more explosives that could be detonated by dialing a cellphone number. In January, he unknowingly told authorities he wanted to know if an explosion would be large enough to destroy an entire building.

El Khalifi met with an undercover law enforcement officer, who gave him an automatic weapon that didn't work. El Khalifi carried the firearm around the room, practiced pulling the trigger and looking at himself in the mirror.

A former landlord in Arlington said he believed El Khalifi was suspicious and called police a year and a half ago.

Frank Dynda said when he told El Khalifi to leave, the suspect said he had a right to stay and threatened to beat up Dynda. The former landlord said he thought El Khalifi was making bombs, but police told him to leave the man alone. Dynda had El Khalifi evicted in 2010.

El Khalifi had at least one man staying with him and claimed he was running a luggage business from the apartment, Dynda said, doubting that was true because he never saw any bags.

"I reported to police I think he's making bombs," Dynda said. "I was ready to get my shotgun and run him out of the building, but that would have been a lot of trouble."

Two people briefed on the matter told The Associated Press the FBI has had him under surveillance around the clock for several weeks. They spoke on a condition of anonymity because they were not authorized to speak publicly.

Dar Al-Hijrah Islamic Center imam Johari Abdul-Malik, who along with other Muslim leaders meets regularly with the FBI, said he was contacted by an agency official after El Khalifi's arrest and told the suspect was not someone he needed to worry about.

He said the official told him that Khalifi was "not a regular at your mosque or any mosque in the area."

Promoted
Listen to the latest songs, only on JioSaavn.com
He said he offered to supply the FBI with surveillance video of the mosque in Falls Church, Virginia, in case it helped with their investigation but was told that was it not necessary.