Daniel Kingery, a 57-year-old voter rights activist, said the man was holding up his burning jacket and recording the incident, which appeared to be a demonstration. 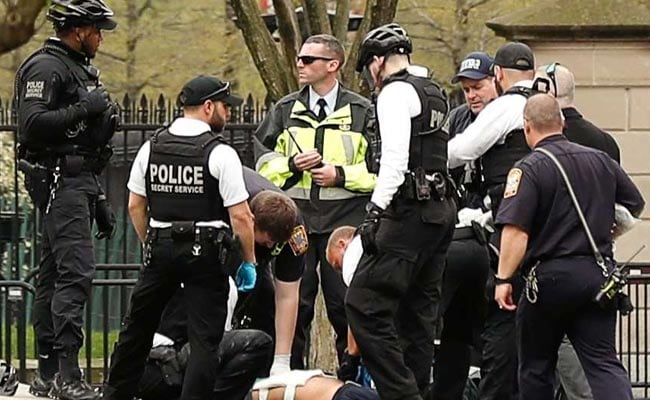 A man in a wheelchair-type electric scooter lit his jacket on fire outside the White House fence on Friday and was hospitalized with what appeared to be non-life threatening injuries, the U.S. Secret Service said.

Secret Service officers responded to the incident on the north side of the executive mansion, extinguished the fire and provided first aid, the agency said on Twitter.

Daniel Kingery, a 57-year-old voter rights activist, said the man was holding up his burning jacket and recording the incident, which appeared to be a demonstration.

"He wasn't obeying their order to put it down, so it was definitely some sort of a protest," Kingery said. The Secret Service put out the fire, knocked him out of the scooter, and dragged him to a statue in nearby Lafayette Square where other officials were waiting, he added.

News video showed emergency medical personnel arriving to tend to a person who police had surrounded on the ground.

A CNN reporter on Twitter cited a Secret Service spokeswoman as saying there was no threat to U.S. President Donald Trump. The incident occurred shortly after Trump spoke at the White House about the nation's 5G network.

(Except for the headline, this story has not been edited by NDTV staff and is published from a syndicated feed.)
Comments
White HouseSecret ServiceMan Lights Jacket On Fire Near White House