Re-watching the clip from WAVE 3 News, Sara Rivest saw the man pretend to spank her in the background, grinning widely beneath his sunglasses. 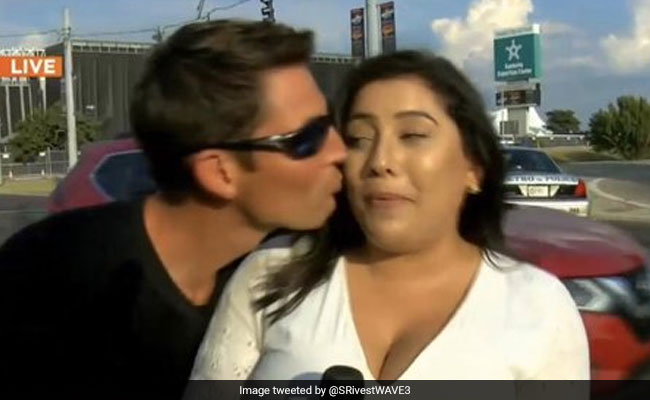 Sara Rivest had a job to do, so she tried to shift gears quickly after a man swooped into her live shot to plant a kiss on her cheek before darting away.

"That was not appropriate," the Louisville television reporter said. She laughed uncomfortably. The camera soon cut to upbeat music and footage from the Kentucky festival Rivest was covering.

But the more Rivest thought about the incident from last Friday, the less she wanted to just move on - like so many journalists who have been harassed on the job and so many women objectified and touched without their consent. Re-watching the clip from WAVE 3 News, Rivest saw the man pretend to spank her in the background, grinning widely beneath his sunglasses.

Hey mister, here's your 3 seconds of fame. How about you not touch me? Thanks!! pic.twitter.com/5O44fu4i7y

She filed a police report, unsure if the man could be identified. On Wednesday, a 42-year-old named Eric Goodman was charged with harassment involving physical contact.

It's a gratifying moment of accountability for Rivest as she tries to convey that what the cameras caught is "unacceptable" rather than a fun prank. The on-air incident was a first for Rivest, but it's a hazard of the job well documented in viral clips and YouTube compilations with titles like "This is Hilarious." One group counted at least 30 female reporters harassed live while covering the 2018 soccer World Cup in Russia.

The Post was unable to reach Goodman. But Rivest believes he's repentant. Wednesday evening on WAVE 3, she read aloud from what she says is his apology letter.

"I was wrong to interrupt your job, invade your personal space and leave you feeling powerless," says the letter, which states that Goodman interrupted Rivest's segment while trying to be funny amid a bachelor party.

Rivest says she believes the words are genuine, though she got the letter from police after authorities found Goodman. But she also thinks the misdemeanor charge - punishable by up to 90 days in jail or a fine of up to $250 - is appropriate.

The Jefferson County Attorney's Office did not respond to inquiries Thursday, but Rivest said she doubts Goodman will face jail time. His court date is set for November, according to WAVE 3 News.

She's accomplished what she wanted, Rivest said: "I don't think he'll do it again."

Rivest has also sparked a flurry of media coverage and fueled a broader discussion about harassment of journalists. That harassment extends to colleagues both male and female, she said, but women are particular targets.

"I think there's a difference in the way women are expected to handle it sometimes," she told The Post. "I'm sure everyone would tell me I don't need to feel this way, but I felt this need to laugh it off, and be reassuring that it was okay, even though it wasn't."

One female reporter at the 2018 World Cup in Russia pressed on without comment after a man put his hand on her chest and kissed her while she spoke on air. She criticized the "violent act of a fan" only later on Twitter.

But others have rebuked their harassers the same way they were targeted - on air.

"Don't do this!" another World Cup reported, Julia Guimaraes, admonished a man who tried to kiss her cheek. "Never do this again, OK?"

"Never do this to a woman," Guimaraes added as the cameras rolled. "Respect."

Reporting last week outside the Kentucky Exposition Center, Rivest reacted first with embarrassment and surprise, she said. In the clip that Rivest would later pin atop her Twitter page with the words, "Hey mister, here's your 3 seconds of fame," the journalist jerks away from her kisser - and then, quickly as he entered the shot, the man is gone.

With the incident broadcast for all to see, though, tips about the man's identity started pouring in on Twitter, Rivest said. That led to Goodman, identified in charging documents as a resident of Indiana.

While Rivest wants the episode to raise awareness about an all-too-common occurrence for journalists, she and Louisville Metro Police spokeswoman Alicia Smiley both drew attention to the cases of unwanted contact and harassment that aren't caught on live video. Maybe Thursday's charge will serve as a warning for the off-camera culprits too, they said.

"So many people have reached out to me with stories that are way worse than this, and the person doesn't get caught or doesn't get charged," Rivest said.

For Kim Walsh-Childers, a journalism professor at the University of Florida who has researched harassment of female journalists, the consequences Goodman now faces are a sign of changing times amid #MeToo and a growing willingness to call out inappropriate behavior.

"I'd hope that female reporters and photographers, videographers, producers, anybody who's out dealing with the public is much more likely now to say, you know what, that is not acceptable," she said.

The charge against Goodman "reminds people that this is not a game, it's not a gag, it's not a stunt," she said.

(Except for the headline, this story has not been edited by NDTV staff and is published from a syndicated feed.)
Comments
Sara RivestKentucky reporterHarassment