Researchers said on Thursday an analysis of fossils of mammals from the Paleocene Epoch found that while their bodies got much bigger, their brain size relative to body mass actually declined. 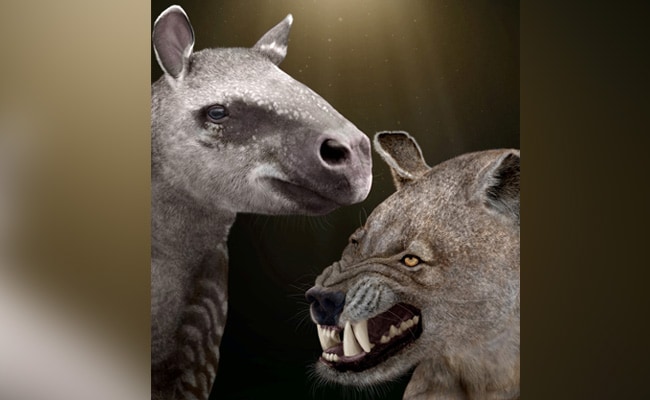 In the aftermath of the asteroid impact 66 million years ago that doomed the dinosaurs, it appears that brawn was more important than brains for the mammals that managed to survive the calamity and conquer a changed world.

Researchers said on Thursday an analysis of fossils of mammals from the Paleocene Epoch - spanning the 10 million years after the asteroid wiped out three-fourths of Earth's species - found that while their bodies got much bigger, their brain size relative to body mass actually declined.

The findings contradict the notion that it was intelligence that drove mammals - bit players during the age of dinosaurs - to become the planet's new rulers following the mass extinction at the end of the Cretaceous Period.

"The process to get large brains to emerge in mammals after the extinction was much slower than we previously thought," said Ornella Bertrand, a postdoctoral researcher in mammal paleontology at the University of Edinburgh and lead author of the study published in the journal Science http://www.science.org/doi/10.1126/science.abo1985.

The researchers performed CT scans on fossils of 28 Paleocene mammal specimens and 96 from the subsequent Eocene Epoch, spanning 56-34 million years ago. They assessed brain size and the development of specific cerebral components. Brain growth, they found, kicked in during the Eocene, along with a change in the importance of various functions.

"Contrary to our expectations, the mammals that survived the asteroid and outlasted the dinosaurs were fairly dim-witted. They didn't have near the brainpower of modern-day mammals - and keen intelligence came only many millions of years later," University of Edinburgh paleontologist and study co-author Steve Brusatte said.

Mammals began to evolve greater body size almost immediately after the mass extinction that eliminated the dinosaurs, aside from their bird descendants. Before it, mammals typically were about the size of a shrew. During the Paleocene, some got as big as bears.

The researchers learned that the sense of smell - gauged by the development of the brain's olfactory bulbs - was crucial for Paleocene mammals as they seized new ecological roles. During the Eocene, other capabilities such as the greater integration of vision, hearing, memory and motor control - tied to neocortex development - became more critical for survival.

With dinosaur predators and plant-eaters gone, mammals began to fill these roles in the Paleocene, a time of evolutionary experimentation. Panther-sized Arctocyon, one of the mammals studied, bore large canine teeth and ate meat and possibly plants, too. Llama-sized herbivore Ectoconus, also studied, was heavily built with strong limbs and feet.

The study focused on placentals, by far the most common mammals. Fossils unearthed in recent years in New Mexico, Colorado and France provided insight into Paleocene mammals.

"Within 100,000 years after the extinction, species richness increased, and mammals rapidly became morphologically diverse," Bertrand said. "Some Paleocene species were chunky overall, and quite different from the modern groups, while others lived in trees and may have been possible ancestors to primates - the group that much later includes humans. In the Paleocene, the mammals are doing their own thing."