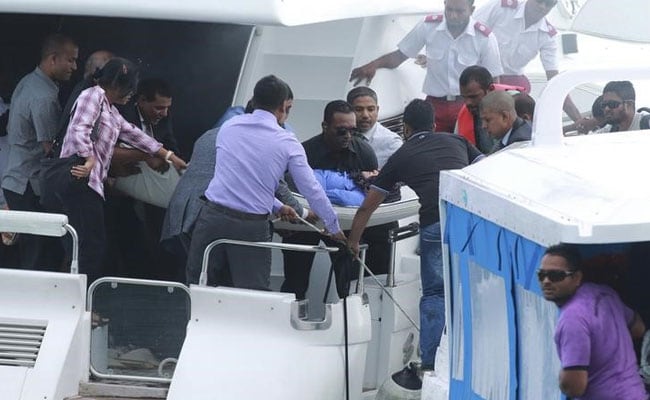 Officials carry an injured woman off the speed boat of Maldives President (not pictured) after an explosion onboard, in Maldives. (Reuters File Photo)

Colombo: A court in the Maldives has jailed former vice president Ahmed Adeeb for 15 years for plotting to assassinate President Abdulla Yameen following an explosion on the president's speed launch last September, his lawyer said on Friday.

The judgment was delivered late on Thursday, four days after Adeeb was sentenced for 10 years on terrorism charges for possessing firearms. The trial was held behind closed doors because of security concerns, according to authorities.

The secret trial is likely to raise international concern over the evidence used to convict Adeeb, once seen as a future leader of the Indian Ocean atoll whose popularity as a tourist paradise is at odds with its deeply troubled politics.

"He was sentenced for 15 years based on seven anonymous witnesses. The court said it can conclude that there was an IED (Improvised Explosive Device)," Moosa Siraj, Adeeb's lawyer told Reuters.

He said one witness testified that Adeeb had given orders for an IED to be planted.

The Maldives invited foreign agencies to examine the evidence of the alleged assassination attempt that took place when Yameen's launch prepared to dock on Sept. 28 last year.

Notably, the US Federal Bureau of Investigation said it found "no conclusive evidence" of a bomb blast.

"The FBI report clearly said it was not an IED, while Saudi investigators' report said there was no evidence to say it was a bomb. We will definitely appeal against the verdict," Siraj said.

Yameen was unhurt in the blast, but his wife and two aides were injured as ti blew off the rear doors of the launch.

Adeeb, 34, was arrested on October 24 after an initial probe. Parliament impeached him on Nov. 5.

Nasheed was himself jailed for 13 years on terrorism charges after a trial in 2015 that was widely denounced as politically motivated. He was allowed to travel to Britain for medical treatment and was last month granted refugee status by London.
© Thomson Reuters 2016