Ahmad Zahid Hamidi, a former deputy premier and ally of scandal-mired ex-leader Najib Razak, is accused of crimes that include accepting bribes to award government contracts and money-laundering. 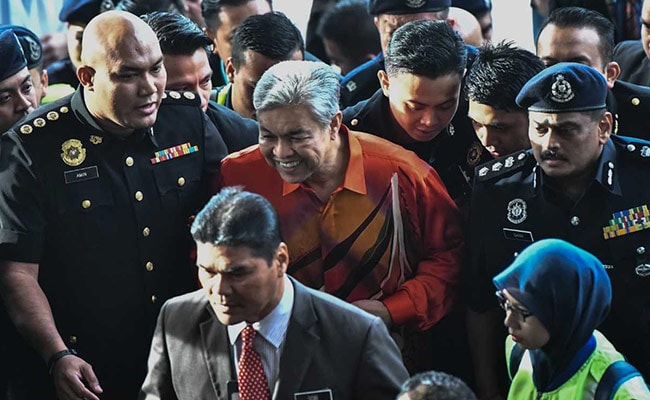 Malaysia's opposition leader was Friday hit with 45 charges in a $26 million corruption case, a new blow to his beleaguered party which lost power in landmark elections this year.

Ahmad Zahid Hamidi, a former deputy premier and ally of scandal-mired ex-leader Najib Razak, is accused of crimes that include accepting bribes to award government contracts and money-laundering.

The 65-year-old pleaded not guilty to all charges, and will stand trial.

A crowd of supporters turned up outside the court in Kuala Lumpur where he was being charged, waving banners that read "we reject the cruel treatment of our leader". Najib also attended the hearing to offer support.

Ahmad Zahid is head of the United Malays National Organisation (UMNO), the lynchpin in a coalition of parties that ruled Malaysia from independence in 1957 until their shock defeat in May polls.

UMNO has been on the ropes since, with many coalition partners abandoning a party that had become synonymous with widespread graft, divisive racial politics in the multi-ethnic country and a rotten ruling elite.

Najib has also been arrested and charged over allegations he oversaw the plundering of state fund 1MDB, a scandal that played a major part in the election defeat.

Key accusations include that he misappropriated money from a charitable foundation he headed; received kickbacks in exchange for awarding government contracts; and laundered money by buying property.

The total amount of money involved in all the charges amounts to some 111 million ringgit ($26.6 million).

Ahmad Zahid was released on bail of two million ringgit. His next hearing is set for December 14.

UMNO insists the case against their leader is politically motivated and his brother, Mohamad Lokman Hamidi, said Friday was a "black day" for Malaysia.

"My brother is innocent," he told reporters.

The politician, who also served as interior minister in the last government, stuck by Najib even as other senior figures abandoned him over the 1MDB graft scandal.

US authorities say more than $4.5 billion was misappropriated from the fund, with nearly $700 million diverted into Najib's personal bank accounts. The ex-leader denies any wrongdoing.

(This story has not been edited by NDTV staff and is auto-generated from a syndicated feed.)
Comments
Ahmad Zahid HamidiGraft Case