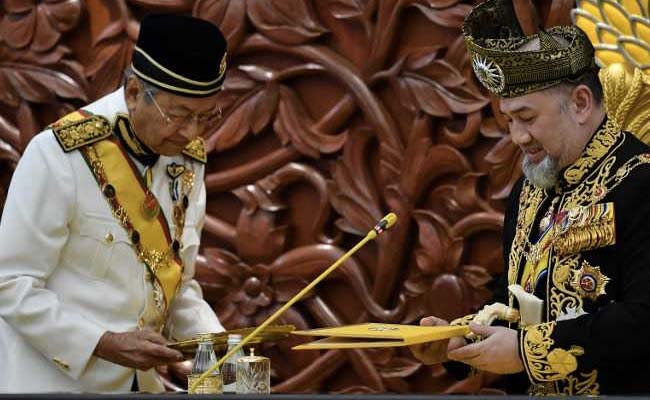 Malaysia's royals prepared on monday to pick a new king to replace Sultan Muhammad V, who abdicated in a historic first after reportedly marrying a Russian former beauty queen, holding a special gathering at the national palace.

The king stepped aside yesterday following intense speculation about his future after reports surfaced in recent weeks that he had taken medical leave, and then wed the former Miss Moscow.

As the country reacted with shock to the news, Malaysia's Islamic royal families set about the task of electing a new king to replace Muhammad V, 49, who gave up the throne just two years into his term.

Malaysia is a constitutional monarchy, with a unique arrangement where the throne changes hands every five years between rulers of the country's nine states headed by centuries-old Islamic royalty.

The royal households take it in turn to provide the country's king, and it is usually known before the formal election who will become the monarch.

While their role is ceremonial, Malaysia's royalty command great respect, especially from Muslim Malays, and criticising them is strictly forbidden.

A special meeting of the rulers was held at the palace in Kuala Lumpur to set a date for a new king to be elected, official news agency Bernama reported.

It will happen in the coming weeks, with the new king expected to serve a full, five-year term.

The national palace did not respond to requests for comment.

Sultan Nazrin Shah of northern Perak state is the acting king, local media reported. He is the current deputy king and performed Muhammad V's duties after he went on medical leave at the start of November.

Despite mounting speculation in recent days the king might give up the throne, there was still palpable shock in the Muslim-majority country at the first abdication of a king since the end of British rule in 1957.

"I am naturally stunned. The (king) is a man of the people," Siti Nur Fahimah Razali, a 25-year-old trader from the king's home state of Kelantan, told the New Straits Times newspaper.

Among those wishing the former king well was scandal-plagued former premier Najib Razak, who wrote in a Facebook post: "We Malaysians pray for his health and that he is protected by Allah. Long live the king!"

But there had been growing unease after reports emerged in foreign media in late November -- several weeks after the king went on leave -- that he had married the Russian, Oksana Voevodina.

Royal officials in Malaysia have not so far commented on the reported marriage.

(Except for the headline, this story has not been edited by NDTV staff and is published from a syndicated feed.)
Comments
MalaysiaMalaysian Royal FamilySultan Muhammad V