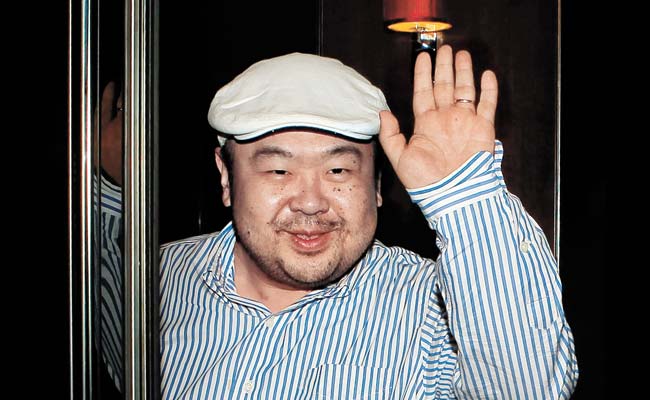 Kim Jong-Nam's body has been held in a Kuala Lumpur morgue since an autopsy on Wednesday. (File photo)

Kuala Lumpur, Malaysia: Malaysian police on Saturday said they had arrested a North Korean man over the assassination of Kim Jong-Un's brother, as relations between Pyongyang and Kuala Lumpur nosedived in a battle for his body.

A 46-year-old was arrested on Friday evening with documents that identified him as North Korean citizen Ri Jong Chol, a police statement said, making him the first person from the North to be detained over the case.

Kim Jong-Nam died after an unidentified liquid was sprayed on his face at Kuala Lumpur international airport on Monday, in an attack Seoul says was carried out by female agents on the orders of Pyongyang.

Local officers have already arrested a woman with a Vietnamese passport and a Malaysian man, as well as an Indonesian woman, who foreign police said could have got involved in the murder thinking it was a reality TV prank.

Mr Jong-Nam's body has been held in a Kuala Lumpur morgue since an autopsy on Wednesday, the results of which could take up to two weeks to come through, Malaysia's health minister told reporters.

After Malaysia ignored demands to return the remains, Pyongyang accused Kuala Lumpur of conspiring with its enemies and said it would reject whatever results came from the post-mortem.

"The Malaysian side forced the post-mortem without our permission and witnessing. We will categorically reject the result of the post-mortem conducted unilaterally excluding our attendance," the North Korean ambassador told reporters gathered outside the morgue on Friday.

Ambassador Kang Chol's comments were the first official remarks from the country since the killing, while North Korean state media has remained silent on the murder.

The ambassador said he had met Malaysian police, demanding the release of the body without success, according to an English-language transcript of his speech.

"They are colluding with the hostile forces towards us who are desperate to harm us of malice," the transcript said, suggesting South Korea was trying to defame the North in a bid to distract from a corruption scandal at home.

Malaysia's top health official told reporters on Saturday that the government was "not bothered" by the complaint and that Pyongyang would have to wait as long as it took for the autopsy report to be published.

"Normally it will take about two weeks to find out what was the cause of death...Until we find something conclusive we will not be able to release the report," S Subramaniam said.

Pyongyang and Kuala Lumpur had enjoyed warm ties until the assassination, with a reciprocal visa-free deal for visitors, an unusual proposition for the reclusive North.

Before the arrest of the North Korean, detectives had detained a 25-year-old Indonesian woman named Siti Aishah and her Malaysian boyfriend, along with a woman carrying a Vietnamese passport that identified her as Doan Thi Huong, 28.

Indonesian Police Chief Tito Karnavian said he had information from Malaysia that Aishah was tricked into thinking she was simply taking part in pranks for a TV show like "Just For Laughs".

"Probably she was just used -- she did not realise it was an assassination attempt," he was quoted as saying in local media.

The drama erupted on Monday morning as Mr Jong-Nam prepared to board a plane to Macau. Malaysian police say the 45-year-old was jumped by two women who squirted a liquid in his face.

Mr Jong-Nam told staff he was suffering from a headache and was taken to the airport clinic grimacing in pain, according to Malaysian media citing CCTV footage from the airport.

He was once thought to be the natural successor to his father, but on Kim Jong-Il's death in 2011 the succession went to Kim Jong-Un, who was born to the former leader's third wife.

Reports of purges and executions have emerged from the current regime as Jong-Un tries to strengthen his grip on power in the face of international pressure over nuclear and missile programmes.

Promoted
Listen to the latest songs, only on JioSaavn.com
South Korea has cited a "standing order" from Jong-Un to kill his sibling and a failed assassination bid in 2012 after he criticised the regime.