Makeover for Wonder Woman at 69 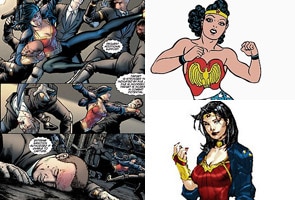 New York: Wednesday is a good day for Wonder Woman. This 69-year-old superheroine, published by DC Comics, will don a new -- and less revealing -- costume and enjoy the publication of Issue No. 600 of her monthly series. (In pics: Wonder Woman's makeover)

The costume ties into an alternative history for the character devised by J. Michael Straczynski, the new writer of the series, and into a quest by DC to shine a critical and creative spotlight on the heroine, who stands with Superman and Batman in its primary triumvirate of superstars, despite her series's modest sales.

In the reimagining of her story, Wonder Woman, instead of growing up on Paradise Island with her mother, Queen Hippolyta, and her Amazon sisters, is smuggled out as a baby when unknown forces destroy her home and slaughter its inhabitants.

Mr. Straczynski, who created the television show "Babylon 5" and wrote the screenplay for "Changeling" in 2008, starring Angelina Jolie, said in an e-mail message that he wanted to address "the wardrobe issue" as soon as he took the job.

"She's been locked into pretty much the exact same outfit since her debut in 1941," Mr. Straczynski wrote. "If you're going to make a statement about bringing Wonder Woman into the 21st century, you need to be bold and you need to make it visual. I wanted to toughen her up, and give her a modern sensibility."

He added, "What woman only wears only one outfit for 60-plus years?"

Given Wonder Woman's pre-eminence as a female character in the largely male superhero pantheon, her looks have always been a matter of more than casual interest, to both fanboys and feminists. In a 2006 interview about her work on the series, the novelist Jodi Picoult said: "One of the first things I did was ask if we could give her breast-reduction surgery, because as a woman, I know you wouldn't fight crime in a bustier. But I was somehow shot down by DC."

The new costume was designed by the artist Jim Lee, who in February was named co-publisher of DC, alongside Dan DiDio. Given the assignment, "my first reaction was, 'Oh my gosh,' " Mr. Lee said in an interview. But he welcomed the challenge: "When these characters become so branded that you can't change things, they become ossified."

The new look -- with an understated "W" insignia, a midnight blue jacket and a flinty fusion of black tights and boots -- is darker than the famed swimsuit-style outfit, and aims to be contemporary, functional and, as Tim Gunn of "Project Runway" might say, less costumey.

Given the hope that the character will one day have her own international film franchise (a feature has long been gestating at Warner Entertainment, DC's parent company), one test of the design was to imagine how it would look standing next to, say, Batman's politically neutral ensemble. "The original costume was the American flag brought to life," Mr. Lee said. "This one is a little more universal."

Mr. Lee has drawn his share of sexy superheroines (the X-Men's Rogue among them), some in skimpy costume, and knows what many fans will ask: "Why am I covering up her legs?" Ultimately, he wanted her to look strong "without screaming, 'I'm a superhero.' "

The arrival of Issue 600 is a bit of comic-book sleight of hand, or, as DC calls it, a return to historical numbering. Wonder Woman's first self-titled series, which begin in 1942, ended with No. 329. The character was then overhauled, her previous continuity erased, and she starred in Volume 2 as a heroine new to the world. That incarnation lasted 226 issues. Another new direction spurred a third volume (and, to collectors who care about such things, another Issue No. 1) that ran for 44 issues. Do the math, and what would have been Issue No. 45 is now Volume 1, No. 600.

Promoted
Listen to the latest songs, only on JioSaavn.com
The new costume will almost certainly be better received than the curveball thrown Wonder Woman in 1968, when she lost her powers, dressed mod and practiced martial arts. It took the attention of no less than Gloria Steinem to protest the change, and to help get the Amazon back into her star-spangled duds. Ms. Steinem went on to use Wonder Woman, resplendent in red, white and blue, on the cover of the first issue of Ms. magazine in 1972. A cover line proclaimed, "Wonder Woman for President."

That's the kind of attention Mr. Straczynski thinks she deserves: "Wonder Woman is a strong, dynamic, vibrant character who should be selling in the top 20, and I'm going to do all I can to get her there."