Lone Employee At Waffle House Was Swamped. So Customers Jumped In To Help

Crispo saw the employee talking to a customer in a blue shirt seated at the counter. Then, he said, the employee handed the man an apron and the customer started doing dishes. 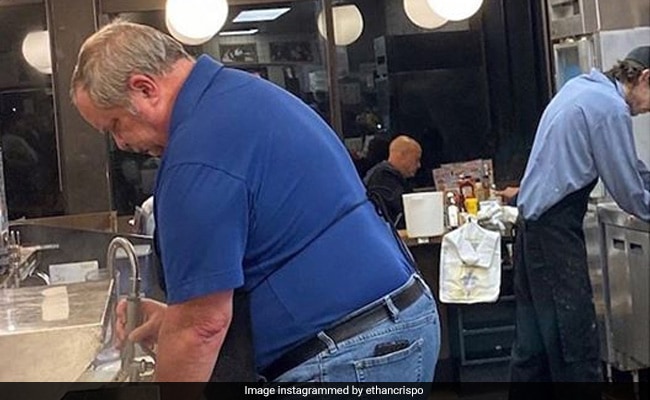 Ethan Crispo initially sent the email to AL.com, the news outlet that first wrote the story.

Ethan Crispo was hungry after a friend's birthday party, and he stopped at his local Waffle House restaurant in Birmingham, Alabama, to get a midnight snack.

"I sat down at my table and I was like, 'I'm not getting my waffle,' " said Crispo, 24, who observed there was just one employee in the restaurant to cook the food, serve it and wash the dishes.

"The look on his face was maybe fear, maybe shock, maybe bewilderment," Crispo said of the worker, whose name tag said "Ben."

"There was literally no one else working but him," Crispo said in an interview with The Washington Post.

Crispo saw the employee talking to a customer in a blue shirt seated at the counter. Then, he said, the employee handed the man an apron and the customer started doing dishes.

"It was a transition so smooth I initially assumed it was a staff member returning to their shift," Crispo wrote in an email he gave The Post. "It wasn't. It was a kind stranger. A man who answered the call. Bussed [sic] tables, did dishes, stacked plates."

Crispo initially sent the email to AL.com, the news outlet that first wrote the story. In it, he said the customer and the employee worked "feverishly" to tend to the other patrons.

When the server walked over to Crispo's table, Crispo asked what was going on and the server told him two other employees had been there to help him, but they left - so diners jumped in to help.

Soon after, Crispo said, a customer in a dress got up, walked behind the counter and started making coffee.

"She figured out how to do the coffee maker. She was in a sequined dress and heels," Crispo said.

"She tried to take an order or two but then she went to busing tables. It was bizarre to see someone doing that in a sequined dress and heels."

Another customer in a red shirt also pitched in to help for a few minutes, said Crispo, adding that he left without getting their names.

Waffle House did not answer an email from The Post on Sunday. But Pat Warner, the restaurant's director of PR and external affairs, told AL.com there had been a miscommunication in scheduling workers that night at the restaurant on Highway 280. Several employees left when their shift was over, and their replacement workers did not show up, he said.

"We really appreciate their efforts . . . though we do prefer our associates to be behind the counter," Warner told AL.com. "The key to our concept is, we're there to serve you, not the other way around."

Crispo, who is from Birmingham and goes to that Waffle House about once a month, said he asked the employee, Ben, why he didn't just leave. He told Crispo, "It's not the right thing to do."

Crispo said he did end up getting his food that night, a double waffle, no syrup.

"It was surprisingly fantastic," Crispo said. "Ben did an incredible job."

And, he said, so did the customers who pitched in.