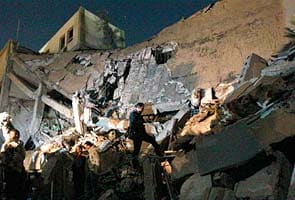 Tripoli: After a second night of American and European strikes by air and sea against Col. Moammar el-Gaddafi's forces, European nations on Monday rejected Libyan claims that civilians had been killed. Pro-Gaddafi forces were reported, meanwhile, to be holding out against the allied campaign to break their hold on the ground while enforcing a no-fly zone.

Rebel fighters trying to retake the eastern town of Ajdabiya said they were driven back on Monday by rocket and tank fire from government loyalists still controlling entrances to the city. Dozens of fighters retreated to a checkpoint around 12 miles north of the Ajdabiya, and said at least eight others had been killed during the day's fighting, including four who had been standing in a bloodied pickup truck that the fighters showed to reporters.

There were conflicting reports about whether the allies had attacked loyalist forces in the town. While planes had been heard overhead, the rebel fighters said there appeared to have been no attack on the pro-Gaddafi forces holding the entrance to Ajdabiya on the coastal highway leading north to Benghazi. Ajdabiya is a strategically important town that has been much fought over, straddling an important highway junction and acting as a chokepoint for forces trying to advance in either direction.

The retreat from Ajdabiya appeared to have thrown the rebels into deep disarray, with one commander at the checkpoint trying to marshal the opposition forces, using a barely functioning megaphone, but few of the fighters heeding his exhortations.

In the western city of Misurata, forces loyal to Colonel Gaddafi were still at large and were using civilians from nearby towns as human shields, Reuters reported. But there was no immediate confirmation of that report.

As the allied air campaign went forward, it faced growing criticism around the world, notably from Russia and China, which both abstained from voting on the United Nations resolution. "In general, it reminds me of a medieval call for a crusade," Prime Minister Vladimir V. Putin of Russia said on Monday, after criticizing the allies on Monday for "indiscriminate use of force."

On the eve of a visit from Defense Secretary Robert M. Gates, Mr. Putin called the resolution "deficient and flawed," saying, "It allows everyone to undertake any actions in relation to a sovereign government."

A commentary in China's state-run People's Daily said the Western actions violated international law and courted unforeseen disaster. "It should be seen that every time military means are used to address crises, that is a blow to the United Nations Charter and the rules of international relations," the article read in part.

On Sunday a vital Arab participant in the agreement expressed unhappiness with the way the strikes were unfolding. The former chairman of the Arab League, Amr Moussa, told Egyptian state media that he was calling for an emergency league meeting to discuss the situation in the Arab world, and particularly Libya.

"What is happening in Libya differs from the aim of imposing a no-fly zone, and what we want is the protection of civilians and not the bombardment of more civilians," he said, referring to Libyan government claims that allied bombardment had killed dozens of civilians. But on Monday, Mr. Moussa spoke of the allied actions in more measured tones, saying, "We respect the Security Council's resolution and we have no conflict with the resolution, especially as it confirms that there is no invasion or occupation of Libyan territory."

As the assault unfolded late Sunday, an explosion thundered from Colonel Gaddafi's personal compound in Tripoli, and a column of smoke rose above it, suggesting that the allied forces may have struck either his residence there or the nearby barracks of his personal guards. Unnamed Western officials were quoted in various news reports as saying the building was a military command and control center.

Journalists taken by the Gaddafi government to visit the site shortly after the blast said they saw a bomb-damaged building that appeared to be an administrative center rather than a military barracks or a Gaddafi residence, although the exact nature of the facility could not be definitively confirmed. No casualties were reported, though the government spokesman, Moussa Ibrahim, called it "a barbaric bombing."

Asked about the explosion, Vice Adm. William E. Gortney said in a Washington news conference that the United States was not trying to kill the Libyan leader. "At this particular point I can guarantee that he's not on a targeting list," he said, saying that the United States military was working to weaken his military capacity rather than remove him.

In London, the Defense Ministry said on Monday that British Tornado aircraft that had flown 1,500 miles from a base in eastern England overnight aborted their mission at the last minute after "further information came to light that identified a number of civilians within the intended target area. As a result, the decision was taken not to launch weapons. This decision underlines the U.K.'s commitment to the protection of civilians." The ministry did not identify the specific target, but officials indicated that the Tornados' sortie was part of an effort, reinforced by cruise missiles fired from a British submarine in the Mediterranean, to strike at air defense systems.

The planes were to have struck their target at around midnight, British time -- the early hours of the morning in Libya.

Britain also made clear that it placed no store in a Libyan announcement on Sunday night of a second cease-fire. "We and our international partners are continuing operations in support of the United Nations Security Council resolution" authorizing the attacks, the Defense Ministry said. In an interview on British radio, Foreign Secretary William Hague said the allies would judge Colonel Gaddafi "by his actions not his words."

"They have to be observing a real cease-fire" before the air and sea attacks would stop, he said.

In Paris, an official said France had no information that civilians had been killed in the air assaults. François Baroin, a government spokesman, told a French television channel that French commanders were not aware of any information relating to civilian deaths.

Rebel forces, battered and routed by loyalist fighters just the day before, began to regroup in the east on Sunday as allied warplanes destroyed dozens of government armored vehicles near the rebel capital, Benghazi, leaving a field of burned wreckage along the coastal road to the city. By nightfall, the rebels had pressed almost 40 miles back west toward the strategic crossroads city of Ajdabiya, witnesses and rebel forces said. And they seemed to consolidate control of Benghazi despite heavy fighting there against loyalist forces on Saturday. There was evidence, too, that the allies were striking more targets in and around Tripoli, the capital. More explosions could be seen or heard near the city center, where an international press corps was kept under tight security constraints. Recurring bursts of antiaircraft guns and a prolonged shower of tracers arced over the capital on Sunday night.

The chairman of the Joint Chiefs of Staff, Adm. Mike Mullen, spoke about how allied forces had grounded Colonel Gaddafi's aircraft and worked to protect civilians -- both objectives stated by the United Nations Security Council in approving the military mission. "We hit a lot of targets, focused on his command and control, focused on his air defense, and actually attacked some of his forces on the ground in the vicinity of Benghazi," Admiral Mullen told Fox News.

But the campaign may be balancing multiple goals. President Obama, Secretary of State Hillary Rodham Clinton and British and French leaders have also talked of a broader policy objective -- that Colonel Gaddafi must leave power. In his comments on Sunday, Admiral Mullen suggested that objective lay outside the bounds of the military campaign, saying on NBC that Colonel Gaddafi's remaining in power after the United States military accomplished its mission was "potentially one outcome."

Mr. Gates, on a flight to Russia, said he was concerned about that possible result. Though he praised the mission's "successful start," he cautioned that a partitioned Libya, with rebels holding the east and Colonel Gaddafi the West, could bring trouble. "I think all countries probably would like to see Libya remain a unified state," Mr. Gates said. Gen. Carter F. Ham, who as the head of the United States Africa Command is overseeing the operation, said in an e-mail on Sunday that "the initial strikes have had, generally, the effects we sought. Fixed air defense sites, particularly the longer-range systems, appear to no longer be operating."

The American and French militaries both said that Qatar would join the military operation, which would be the first Arab military force to explicitly sign on. But there were no details on what role the Qatar forces would take.

The Americans, working with the British, French and others, flew a wider array of missions than the day before, when Navy cruise missile barrages were their main weapons. They deployed B-2 stealth bombers, F-16 and F-15 fighter jets and Harrier attack jets flown by the Marine Corps striking at Libyan ground forces, air defenses and airfields. Navy electronic warplanes, EA-18G Growlers, jammed Libyan radar and communications. British pilots flew many of the bombing missions, and French, British and American planes all conducted ground attacks near Benghazi, American commanders said.

Promoted
Listen to the latest songs, only on JioSaavn.com
Admiral Gortney said that allied strikes against Colonel Gaddafi's forces had been "very effective." But he warned that coalition forces had not hit Libyan mobile surface-to-air missile batteries and that shoulder-launched missiles, called Man-Portable Air-Defense Systems, or Manpads, also remained. Near Misurata, the last major Western city held by the rebels, B-2 bombers destroyed aircraft shelters at an airfield, the admiral said. A rebel spokesman within the besieged city, giving his name as Muhammad, said allied airstrikes had destroyed a military convoy coming to reinforce the troops encircling the city. But he said that Saturday night's strikes had done little to stop the Gaddafi forces from shelling the city and its port, blowing up two power stations. A rebel who said he was a doctor said seven had died and the city was without water or power.

Libyan officials and state television have said that dozens of Libyan civilians were killed in the air attacks. But an Indonesian newscaster, Andini Effendi, reported Sunday that she was able to visit two Tripoli hospitals after the airstrikes early on Sunday and found no influx of casualties, only empty ambulances. Libyan officials promised Sunday to bring foreign journalists to a funeral for civilians killed in the attacks. But the funeral turned out to be more of a pro-Gaddafi political rally, and the true number of dead remained a mystery.