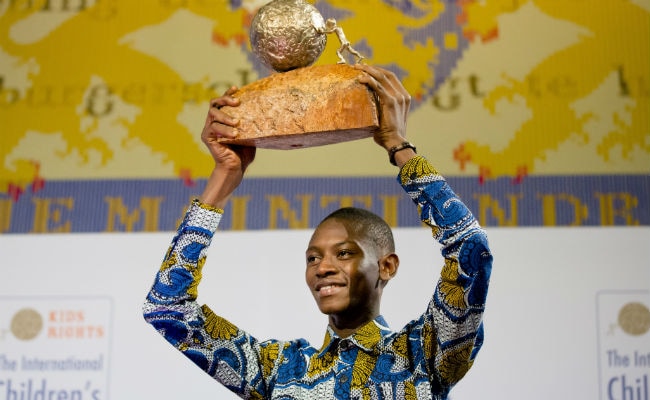 Abraham Keita, 17-years-old, from Liberia, holds-up the International Children's Peace Prize 2015, for his special efforts to improve children's rights in his country, in the Ridderzaal in The Hague, on November 9, 2015. (AFP)

Te Hague: A Liberian teenager was Monday awarded the prestigious International Children's Peace Prize for his "tireless campaigning" to end violence against minors.

Seventeen-year-old Abraham Keita was handed the award by his countrywoman Leymah Gbowee, who in 2011 was awarded a Nobel Peace Prize.

"Keita's tireless work as a campaigner, bringing attention to crimes against children and campaigning until the perpetrators are locked away, stood out and convinced the jury," the competition organisers KidsRights said.

"This award is a symbol of hope for the children in my community, in my country and around the world," Keita told AFP.

In Liberia children are "victims of civil war, of poverty, corruption and violence," Keita said.

"If you give justice to children, you are giving it to the world."

Liberia is still struggling to get back on its feet after 14 years of civil war, which ended in 2003 leaving some 250,000 people dead.

Gbowee, who attended the ceremony in The Hague, said Keita's work was "inspiring", adding that "I recognise in him a true changemaker: fighting to end the extreme violence against children."

The teenager has lobbied the Liberian parliament to adopt laws to protect children, and led marches and demonstrations to highlight the issue.

Some 80 percent of the population lives below the poverty level in Liberia which was also hit this year by the deadly outbreak of Ebola in west Africa.

In a country where 60 percent of the population is under the age of 25, almost 4,500 children lost one or both parents in the outbreak in which some 5,000 people died.

According to a report by the University of Leiden, in the west of the Netherlands, almost half of Liberia's children have experienced some kind of physical violence and 13 percent of girls have been sexually abused.

"When I was nine, a young 13-year-old girl in my area was raped and killed by her foster parents, and I said to myself, that could have been my sister, or cousin or even me," Keita said.

The International Children's Peace Prize has been awarded annually since 2005 to a child who "fights courageously for children's rights."

"Every year, the message of the new young winner has enormous impact and demonstrates to millions of people globally that change is possible," the KidsRights Foundation added.