The asteroid is predicted to get no closer than 2.6 million miles from Earth, despite NASA's scary-sounding classification of the rock as "potentially hazardous". 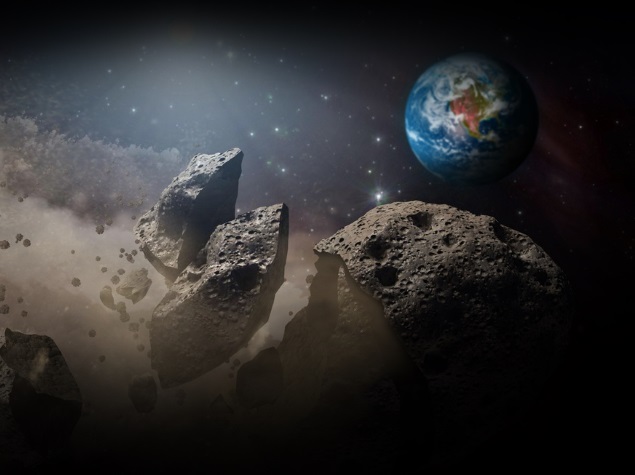 When AJ129 passes closest to Earth next month, it will still be 10 times farther from us than the moon.

An asteroid larger than any skyscraper yet built is hurtling toward Earth, the Daily Mail informs. If it hits on Feb. 4, the paper continues, scientists predict a decade of cold and darkness, and skies choked with soot, and misery across the planet.

Between these paragraphs, the Mail inserts occasional reminders that asteroid 2002 AJ129 will not hit Earth, according to NASA. In fact it is predicted to get no closer than 2.6 million miles from Earth, despite NASA's scary-sounding classification of the rock as "potentially hazardous" - a term which the Mail has paired with horrific illustrations of an asteroid careening straight into the planet.

The Sun is on the story too: "FAST AND DANGEROUS?" Meanwhile, the Daily Star has mocked up a depiction of the asteroid bearing down on Hyde Park. If you loaded up Google on Sunday morning and clicked "News," you'd be greeted by a picture of AJ129 boiling away an ocean, beside the headline, "Doomsday?"

No wonder that on Friday, a concerned citizen sent NASA a link to a report that the asteroid was on a collision course to kill us all, and asked why the agency wasn't talking about it.

"Because it's a lie," NASA tweeted.

Not even a novel lie. AJ129 is one of hundreds of asteroids of a certain size that have flown or will fly within 4.65 million miles of Earth, and are therefore classified by NASA as "potentially hazardous."

None of them are predicted to hit us.

When AJ129 passes closest to Earth next month, NASA has explained, it will still be 10 times farther from us than the moon. And while the headlines are comparing it to the world's tallest building, it could be as big as two-thirds of a mile across, or as small as about 500 yards.

In any event, it won't matter much to us because it won't hit us.

"We have been tracking this asteroid for over 14 years and know its orbit very accurately," NASA manager Paul Chodas wrote for the agency. "Asteroid 2002 AJ129 has no chance - zero - of colliding with Earth on Feb. 4 or any time over the next 100 years."

So why are the tabloids freaking out about the asteroid? Because they do it all the time.

A few weeks before AJ129 made headlines, the Daily Mail was warning about a truck-sized asteroid "set to make a 'close' approach with Earth in HOURS." It passed by harmlessly.

In December, the paper was worried about 2012 DA14. Last summer it was asteroid NY65, which the Mail wrote "could potentially wipe out life as we know it." It didn't.

Google "potentially hazardous" asteroids, and you get nearly 30,000 results from the Daily Mail alone. Maybe that's because more than 2,000 objects that fit the classification are predicted to swing past Earth in the future, according to NASA's asteroid database. Forget about Feb. 4. There will be one on Monday.

Which isn't to say asteroids are no concern. As The Washington Post has previously written, a relatively small one slammed into Siberia in 1908 with the force of 1,000 atomic bombs. There have been true close calls within the past decade. Even a tiny meteor that burned up in our atmosphere sent an alarming meteoroid arcing across the Michigan sky a few days ago. And if a big asteroid did hit the planet, we really would all probably die.

That very small but very scary possibility is why NASA tracks so many space rocks, and gives one that are predicted to pass within a few moonshots the "potentially hazardous" terminology that births so many headlines.

The agency carried out a simulation with FEMA in 2016 about what could be done if a large asteroid really was found to be on a collision course with Earth. It was a grim exercise, involving the mass evacuation of Los Angeles "while also addressing how to refute rumors and false information that could emerge in the years leading up to the hypothetical impact."

Fortunately, no such asteroid is known to exist.

Promoted
Listen to the latest songs, only on JioSaavn.com
Unfortunately, NASA's still bogged down with managing rumors.