Leonardo DiCaprio Warns: 'We Are Pushing Oceans To The Brink' 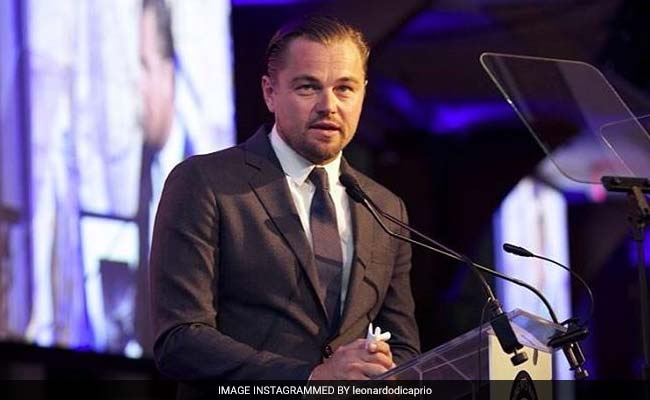 Leonardo DiCaprio's character in "Titanic" might have an ambivalent relationship with the ocean (spoiler for the eight people who haven't watched yet: he drowns), but the actor himself is a big fan of the seas - and at a State Department oceans conference on Thursday, he warned about environmental threats to marine ecosystems.

"They are . . . pushing our oceans to the very brink," he said, warning against "treating our oceans as an endless resource and a dumping ground for our waste."

Onstage, DiCaprio (sporting a dark suit and close-cropped facial hair) announced a new online tool to track commercial fishing. The creators of Global Fishing Watch - the advocacy group Oceana, enviro-mapping nonprofit SkyTruth and Google - say it will allow citizens, journalists and the government to look for overfishing or illegal harvesting. He also praised President Barack Obama's announcement Thursday of a new marine national monument that protects thousands of miles of ocean off the New England coast.

"This is the kind of bold leadership we need," DiCaprio said.

In introducing the actor/activist, Secretary of State John Kerry alluded to DiCaprio's on-screen maritime adventures: "It involved a certain iceberg, and it didn't turn out so well." But he was most enthusiastic about DiCaprio's environmental work, including a new documentary, "Before the Flood."

"We've been able to hang together and plot environmental endeavors," Kerry said of his pal, whom he called a "committed activist." "He's the genuine article."

Kerry also mock-marveled at all the attention the program was getting, with the added presence of the Oscar winner on the stage. "How come all the cameras are out now?" he asked. "You didn't do this earlier."