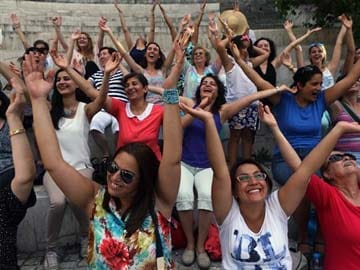 Istanbul: Protests last year against Prime Minister Recep Tayyip Erdogan may have died down, but a top minister's comment that women should not laugh loudly in public has become a new rallying cause for secular Turks angered by his pro-Islamic rule.

Erdogan remains the hot favourite to win Sunday's presidential election, thanks to a core base of religiously conservative Turks who have prospered under his decade-long domination.

But whatever the result on Sunday, it is certain that Erdogan will not be carrying the whole of an increasingly polarised country with him.

Many secular Turks fear the ruling Justice and Development Party (AKP) wants to gradually Islamise the modern Turkish state, built on strict secular principles since it was founded in 1923 by Mustafa Kemal Ataturk.

Their anger boiled to the surface in the protests starting in May 2013, which were triggered by government plans to build a development over a park in central Istanbul.

The comments by Deputy Prime Minister Bulent Arinc -- a founding father of the AKP -- have become a new lightning rod for their dissent ahead of the presidential elections.

"Chastity is so important.... She should not laugh loudly in front of all the world and should preserve her decency at all times," he added.

-'Resist by laughing'-
Arinc's comments sparked an extraordinary campaign on Twitter where thousands of Turkish women posted pictures of themselves laughing deliriously which went viral all over the world.

The pictures were promoted by the hashtags #kakhaha (laughter in Turkish) and #direnkakhaha (#resistlaughter), reprising the "diren" (resist) slogan from the Gezi Park protests.

Many of the protesters were liberal, secular and female, taking to the street to stand up for their rights in the face of creeping infringements on their freedoms by the AKP.

Their list of grievances included Erdogan's proposals to limit abortion, tighten rules for the morning-after pill and alcohol sales, and his suggestion that women should have at least three children.

Erdogan has since deepened the divisions between secular Turks and his pious supporters by calling the protesters "drunkards", saying he took orders only "from God" and claiming that a veiled woman had been attacked by demonstrators in central Istanbul.

The secular middle-class has further been alienated by Erdogan's uncompromising rhetoric, laws including curbs on the Internet, as well as restrictions on alcohol sales and a push by the government to do away with mixed-sex dorms at universities.

During his election campaign two weeks ago, Erdogan visited a female dormitory, where he advised young girls in headscarves not to be "picky" when they are searching for husbands. "Marry when offered," he said.

"And it is no coincidence that Arinc is saying these things just now. It is a clear message of how the government wants to continue to have a say on a woman's behaviour, a women's body and women's decisions in the many years to come," she told AFP.

A Turkish women's right organisations on Monday filed a criminal complaint against Arinc for "discrimination", "slander" and "inciting hatred".

And on Friday, women will gather in Istanbul to take part in a "laughing protest".

According to non-governmental organisations, more than a hundred women in Turkey died as a result of domestic violence in the first six months of 2014.

"Our politicians just want to say that women deserve being raped, beaten, tortured, killed, lose their children and have a miserable life in the end if they don't behave properly," Bayram added.
Comments
Recep Tayyip ErdoganIstanbulBulent ArincministerPrime MinisterTwitterTurkey