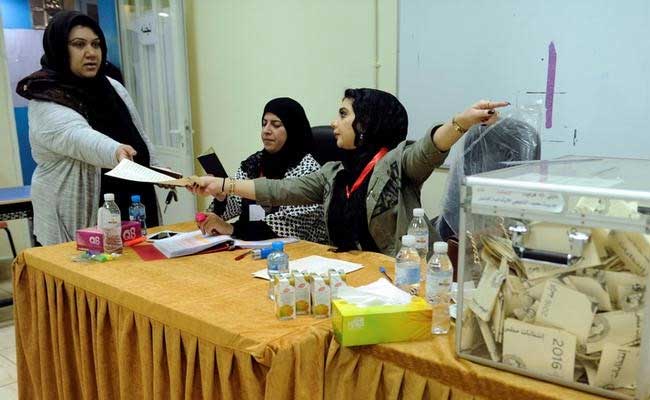 Opposition candidates are estimated to have won around 20 seats out of 50 in Kuwaiti elections that saw most parliament members replaced, in a vote analysts said reflects anger at austerity measures to curb a budget deficit.

The results of Saturday's vote are likely to make it harder for the government to work with the new assembly to pass further reforms.

State news agency KUNA said that 30 new MPs gained seats in the 50-member parliament, including several younger men and one woman, after a turnout estimated at around 65 percent for the Gulf's most outspoken legislature.

Analyst Ibrahim al-Hadban said the election campaign had shown that some of the decisions taken by the government were not popular among citizens, including raising gasoline prices.

"MPs who were in the assembly did not object to these decisions. So, in my view, they were blamed and punished," Mr Hadban, who teaches political science at Kuwait University, told Reuters.

With no political parties, it was difficult to pin down precisely how many opposition MPs had been elected. But some estimates put the number at between 17 and 24.

The opposition, including the Muslim Brotherhood, liberals and pan-Arabists, had boycotted the election in 2012 to protest against changes to election laws they saw as favouring pro-government candidates.

At least two cabinet members failed to win parliament seats this time, apparently an indication of popular discontent with the government's austerity plans.

The parliament of Western-allied Kuwait had been due to run until July 2017, but the Emir, Sheikh Sabah al-Ahmad al-Sabah, dissolved it in October, saying "security challenges" in the region - an apparent reference to wars in Iraq and Syria - should be met by consulting the popular will.

More than 290 candidates, including 14 women, were standing in an assembly that enjoys legislative powers but has often been at odds with the government of Kuwait, one of the world's wealthiest countries, thwarting attempts to strengthen fiscal discipline.

Former speaker Marzouq al-Ghanem, who retained his seat, said political stability was crucial for Kuwait to focus on economic development in what he described as a "sensitive, critical and important stage".

"As I pointed out to all political blocs, progress or development must have a base and the base is political stability," Mr Ghanem told Reuters after polls closed on Saturday night.

Campaigning had focused mainly on austerity measures adopted in the past year after officials forecast a deficit of 9.5 billion dinars ($31 billion) for the 2016/17 fiscal year. The OPEC state relies on oil for about 90 per cent of its revenues.

Although the deficit is likely to be smaller than forecast as it was based on an oil price of $25 a barrel, many Kuwaitis fear the government will try to raise prices further and cut many of the perks they have enjoyed for decades. These include free health care, education, subsidised basic products, free housing or land plots and interest-free loans for many citizens.