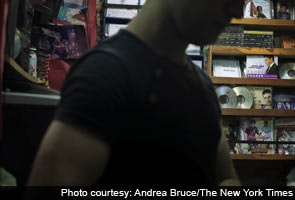 Sidon, Lebanon: His success was a dream come true for this tough port city on the Mediterranean coast: a poor kid whose honeyed voice and ballads of love and heartbreak rocketed him to wealth and fame far from the gun-ridden neighbourhood where he grew up.

Fadel Shaker became a superstar, hailed as "the king of romance," his songs wooing masses throughout the Arab world. He bought a vast, three-story villa with a swimming pool overlooking the city, cars, a private orchard and a beachfront restaurant where he performed at parties.

Then last year, in a move that has baffled fans and friends alike, he renounced popular music as forbidden by Islam, grew a scruffy beard and took up with a hard-line sheik.

Last month during a deadly turf battle with the Lebanese army in a Sidon suburb, he denounced his enemies as dogs and pigs and boasted that his group had killed two men.

He has not been seen in public since, and is believed to be in hiding from the authorities in the refugee camp near where he grew up.

The transformation of Shaker, 44, (pronounced SHACK-er) from a baby-faced crooner into an angry militant has left many here dumbfounded and others angry, and raised dire questions about how the civil war in Syria has inflamed splits in Lebanese society.

"We were all shocked," said Ahmed al-Naaj, a waiter in Shaker's former restaurant. "Why would a famous singer that the whole world knows change all of a sudden like that?"

While even those close to Shaker cannot fully account for his turnabout, most people here see it as yet another symptom of worsening sectarian tensions in Lebanon.

For years, many in this majority Sunni Muslim city have complained of the growing clout of Hezbollah, the Shiite militant group that is Lebanon's most powerful political force. But the civil war in neighbouring Syria brought relations to a new low, with Hezbollah intervening to support President Bashar Assad and the Sunnis backing the rebels fighting for his overthrow.

Those issues clearly rankled Shaker, a Sunni, and accelerated his militancy.

"God willing, we'll take what we deserve with our own hands, because there is no state, there are no judges, there is nothing," he threatened in a live television interview shortly before his disappearance. "We're living in the jungle."

Shaker's early life in many ways resembled the script of an Arab television melodrama. Born to a Lebanese father and a Palestinian mother, he grew up in a poor neighbourhood adjacent to the Ain el-Hilweh Palestinian refugee camp in Sidon. He never finished high school, but his neighbours discovered his musical talent early and booked him to sing at weddings.

As his fame spread, he gave larger concerts in Lebanon and abroad, releasing albums and music videos that made him a household name throughout the Arab world. His hits included romantic ballads like "O Absent One," "I Forgot to Forget You" and "Come, My Love."

His former chauffeur, Hani al-Sin, said that Shaker had been religious but not zealous. He prayed, but his restaurant served alcohol, and Shaker liked to play cards, which some strict Muslims consider sinful.

The first changes came gradually. A few years ago, he informed the restaurant staff without explanation that alcohol would no longer be sold there. Some of his friends attributed the decision to family pressure. His mother was devout, and his older brother, Abdel-Rahman, had joined the Sunni militant group Jund Al-Sham.

In 2010, Shaker took the Muslim pilgrimage to Mecca. He accepted fewer performances after his return and announced last year that he would sing pop music no more.

Other signs of religiosity followed. He let his beard grow and performed religious ballads at mass rallies held by Sunni groups in support of the Syrian rebels.

He also took up with a local firebrand sheik, Ahmad al-Assir, who had gained notoriety for calling for the disarming of Hezbollah and orchestrating media stunts to draw attention to his cause. Al-Assir also spoke in support of Syria's rebels, once traveling to Syria, where he was filmed firing a machine gun from a rooftop.

Shaker became a regular at al-Assir's mosque and appeared with him in public and on television talk shows. During one interview, Shaker sang a jihadist anthem, declaring, "Do not cry for me if I fall, for death does not scare me and I intend to die a martyr."

Underpinning Shaker's new activism was a sense of Sunni empowerment. Lebanon's Sunnis have complained of marginalization and many have taken inspiration from their brethren in Syria to assert themselves in Lebanon.

Samih Arnaout, a longtime associate of al-Assir's mosque, said the sheik explained his outspokenness with an Arab proverb: "Every rooster crows atop his pile of trash."

The sheik felt that the Sunni political leaders were failing to defend their community. "So he said, 'I'm going to crow,'" Arnaout recalled.

Other Sunni leaders feared such activism would create a violent backlash and sought to steer Shaker away from it. Ahmed al-Jardali, a leader in the Lebanese branch of the Muslim Brotherhood in Saida, said he tried to convince Shaker to focus his piety on spiritual songs.

"Someone like Fadel could send a message much better than someone holding a rifle, so it was important for us to try to put him in the right place," Jardali said. "But then the problems started and it was too late for him to choose a different direction."

Last month, clashes broke out between the Lebanese army and gunmen inside al-Assir's mosque. Each side accuses the other of instigating the violence, and al-Assir's followers claimed that Hezbollah fought alongside the army. More than two dozen people were killed in two days and more than were 100 wounded, most of them soldiers.

The sheik and Shaker have not been seen since, but in a video posted online, Shaker, his beard specked with gray, raised two fingers and spoke into the camera.

"We sent home two corpses for you yesterday, you dogs, you pigs," he said. Someone off camera told him 16 soldiers had been wounded, and he responded, "May God increase their number!"

Shaker's pride at fighting the army enraged many of his fans, and other prominent musicians denounced him.

"Sure, you can give up music and decide to be religious, but that doesn't mean you can shoot at people," said Azzam al-Mal, 20, who was fixing a computer in a small music store in Sidon's old stone-walled market.

The shop's owner said he still sold Shaker's CDs, but that many fewer people asked for them.

He sold his restaurant months ago to a man who changed the name and put alcohol back on the menu.

Gunmen ransacked his villa and came back later to set it on fire. A neighbour said they returned three times in one day to make sure the flames took and that repeated calls to the fire department brought no help.

The villa is now a charred shell, its facade stained black with smoke, its windows shattered and its elaborate living room strewn with rubble. Underneath a curved staircase sits a baby grand piano, strangely untouched by the flames.

Standing in Shaker's bedroom upstairs, where springs jutted from a burned mattress and black chandelier hung overhead, Sin, the driver, shook his head.

Promoted
Listen to the latest songs, only on JioSaavn.com
"Even I have no idea what changed him," he said. "How did he benefit from all of this?"