Earlier, Kim greeted Moon with hugs and handshakes as the South Korean leader landed in the North's capital with a mission to revive momentum in faltering talks between Washington and Pyongyang over denuclearisation and advance the prospect of formally ending the Korean War. 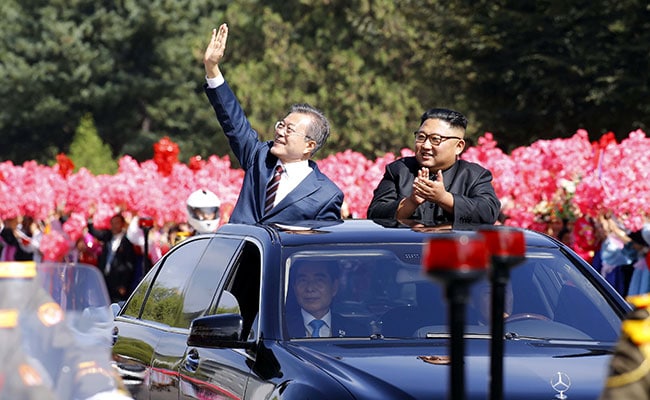 The 2 leaders paraded down the streets of in Kim's black Mercedes limousine to loud cheers. (Reuters)

The two leaders began official talks on Tuesday afternoon, after parading down the streets of Pyongyang in Kim's black Mercedes limousine to loud cheers from nearly 100,000 North Koreans who waved flowers and chanted "Unification! Motherland!"

Earlier, Kim greeted Moon with hugs and handshakes as the South Korean leader landed in the North's capital with a mission to revive momentum in faltering talks between Washington and Pyongyang over denuclearisation and advance the prospect of formally ending the Korean War.

As Kim escorted Moon to the Paekhwawon State Guest House, where the South Korean leader will stay during his three-day visit, Kim said he wanted to produce a "bigger outcome at a faster pace" than the two leaders have achieved so far.

"You Mr. President are travelling all around the world, but our country is humble compared with developed nations," Kim told Moon. "I've been waiting and waiting for today. The level of the accommodation and schedule we provide may be low, but it's our best sincerity and heart."

Moon said it was "time to bear fruit" and thanked Kim for his hospitality, which included a massive welcome ceremony at Pyongyang International Airport featuring a large, goose-stepping honour guard and a military band.

During their motor parade through Pyongyang's landmark Ryomyong Street, a new residential district launched last year under Kim's initiative to modernise the city, Kim and Moon briefly stepped out of the vehicle to greet and take flowers from members of the crowd.

The two leaders were scheduled to attend a musical performance and have dinner at Mokrankwan, a top banquet hall where Kim hosted massive celebrations last year to congratulate scientists and officials for tests on long-range missile capable of reaching the United States.

This week's summit, the third between Moon and Kim, will be a litmus test for another meeting Kim has recently proposed to U.S. President Donald Trump.

Trump has asked Moon to be "chief negotiator" between himself and Kim, according to Moon's aides, after Trump cancelled a trip to Pyongyang by his secretary of state last month.

Washington wants to see concrete action toward denuclearisation by North Korea before agreeing to a key goal of Pyongyang - declaring an end to the 1950-53 Korean War.

"If North Korea-U.S. dialogue is restarted after this visit, it would have much significance in itself," Moon said before his departure.

Underscoring the challenges ahead, North Korea's official Rodong Sinmun said on Tuesday "the responsibility falls squarely on the United States" for the stalled nuclear discussions.

"It is due to its nonsensical, irrational stubbornness that other issues can only be discussed after our country has completely verifiably, irreversibly dismantled our nuclear capabilities... without showing the intention to build trust including declaring the end of war," the newspaper said in an editorial.

Moon, himself the offspring of a family displaced by the war, has met Kim twice this year at the border village of Panmunjom.

Travelling with him are South Korean business tycoons, including Samsung scion Jay Y. Lee and the chiefs of SK Group and LG Group. They will meet with North Korean Deputy Prime Minister Ri Ryong Nam, who is in charge of economic affairs, although Seoul officials said they did not expect any specific joint economic projects to be agreed given extensive international sanctions.

On Wednesday, Moon and Kim plan to hold a second round of officials talks after which they are expected to unveil a joint statement, and a separate military pact designed to defuse tensions and prevent armed clashes. Moon will return home early Thursday.

This week's summit comes as the United States presses other countries to strictly observe U.N. sanctions aimed at choking off funding for Pyongyang's nuclear and ballistic missile programmes.

North Korea says it has destroyed its main nuclear and missile engine test site and has halted atomic and ballistic missile tests, but U.S. officials and analysts believe it is continuing to work on its weapons plans covertly.

U.S. Ambassador to the United Nations Nikki Haley accused Russia on Monday of "cheating" on U.N. sanctions on North Korea.

Moon is hoping to engineer a proposal that combines a framework for the North's denuclearisation and a joint declaration ending the Korean War, Seoul officials said.

The conflict ended with an armistice, not a peace treaty, leaving U.S.-led U.N. forces including South Korea technically still at war with the North.

But U.S. officials remain "unenthusiastic" about declaring an end to the war without any substantial action toward denuclearisation from the North, Seoul officials said.

South Korea is pinning high hopes on Kim's remarks to Moon's special envoys earlier this month that he wants to achieve denuclearisation within Trump's first term in office ending in early 2021.

(Except for the headline, this story has not been edited by NDTV staff and is published from a syndicated feed.)
Comments
Kim Jong UnMoon Jae-in