"Outside Interference" Blamed For Unrest In Kazakhstan; Over 1,000 Injured

Kazakhstan Unrest: Long seen as one the most stable of the ex-Soviet republics of Central Asia, energy-rich Kazakhstan is facing its biggest crisis in decades after days of protests over rising fuel prices escalated into widespread unrest. 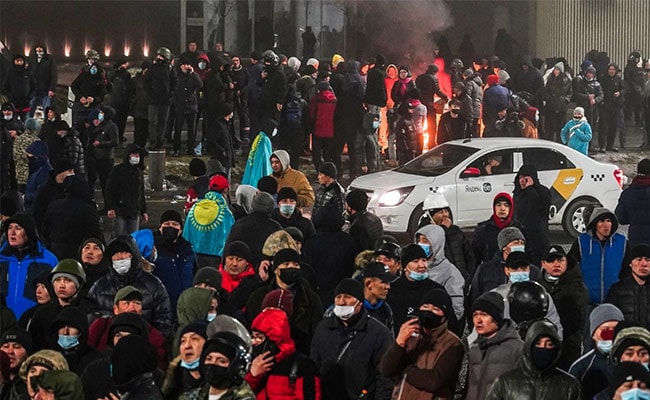 Long seen as one the most stable of the ex-Soviet republics of Central Asia, energy-rich Kazakhstan is facing its biggest crisis in decades after days of protests over rising fuel prices escalated into widespread unrest.

Within hours the alliance said the first troops had been sent, including Russian paratroopers and military units from the other CSTO members.

"Peacekeeping forces... were sent to the Republic of Kazakhstan for a limited time to stabilise and normalise the situation," the CSTO said in a statement, without specifying the number of troops involved.

In the worst reported violence so far, police said dozens of people were killed in battles with security forces at government buildings in the country's largest city Almaty.

Videos on social media on Thursday showed pillaged shops and burned buildings in Almaty, automatic gunfire in the streets and residents screaming in fear.

Officials said more than 1,000 people had been wounded so far in the unrest, with nearly 400 hospitalised and 62 in intensive care.

Protests spread across the nation of 19 million this week in outrage over a New Year increase in prices for liquid petroleum gas (LPG), which is widely used to fuel cars in the west of the country.

Thousands took to the streets in Almaty and in the western province of Mangystau, saying the price rise was unfair given oil and gas exporter Kazakhstan's vast energy reserves.

Protesters were reported to have stormed several government buildings on Wednesday, including the Almaty mayor's office and the presidential residence.

As of late Wednesday, at least eight law enforcement officers had been killed and 317 wounded in the violence, according to the interior ministry quoted by local media.

The full picture of the chaos was unclear, with widespread disruptions to communications including mobile phone signals, the blocking of online messengers and hours-long internet shutdowns.

The protests are the biggest threat so far to the regime established by Kazakhstan's founding president Nursultan Nazarbayev, who stepped down in 2019 and hand-picked Tokayev as his successor.

Tokayev tried to head off further unrest by announcing the resignation of the government headed by Prime Minister Askar Mamin early on Wednesday, but protests continued.

Tokayev also announced he was taking over from Nazarbayev as head of the powerful security council, a surprise move given the ex-president's continued influence.

With protests escalating, the government late on Wednesday said a state of emergency declared in protest-hit areas would be extended nationwide and in effect until January 19.

Much of the anger appeared directed at Nazarbayev, who is 81 and had ruled Kazakhstan since 1989 before handing power to Tokayev.

Many protesters shouted "Old Man Out!" in reference to Nazarbayev and images posted on social media showed a statue of the ex-president being torn down.

The EU and the UN called for "restraint" on all sides, while Washington urged authorities to allow protesters to "express themselves peacefully."

Spontaneous, unsanctioned protests are illegal despite a 2020 law that eased some restrictions on freedom of assembly.

8 Ministers Inducted In Crisis-Hit Sri Lanka, No Finance Minister Yet