Kamala Harris accused Tulsi Gabbard of criticising former US president Barack Obama during his administration, while Gabbard slammed her for "continuing to traffic in lies". 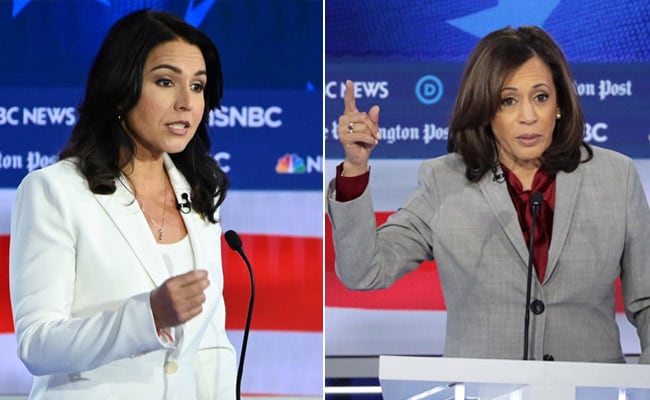 Indian-origin US Senator Kamala Harris and Hindu Congresswoman Tulsi Gabbard engaged in a war of words during the Democratic primary presidential debate.

Harris accused Gabbard of criticising former US president Barack Obama during his administration, while Gabbard slammed her for "continuing to traffic in lies".

The two Democratic presidential aspirants, both of whom have a huge support base among Indian-Americans across the country, were participating in the party's primary debate in Atlanta on Wednesday night.

"It is unfortunate that we have someone on the stage who is attempting to be the Democratic nominee for president of the United States who, during the Obama administration, spent four years full-time on Fox News criticizing President Obama," Kamala Harris said, attacking Tulsi Gabbard.

Interrupting Harris, Gabbard described her statement as "ridiculous". But the Senator from California continued with her attack against the Congresswoman from Hawaii.

"When Donald Trump was elected, not even sworn in, (she) buddied up to Steve Bannon to get a meeting with Trump in the Trump Tower, fails to call a war criminal by what he is - a war criminal - and then spends full time during the course of this campaign again criticising the Democratic Party," Kamala Harris said.

Tulsi Gabbard fired back, what Harris is doing is "unfortunately continuing to traffic in lies and smears and innuendos" as she is not able to challenge her argument of "the leadership and the change that I am seeking to bring in our foreign policy".

The Hawaii Senator said as president, Harris would continue "the status quo, continue the Bush, Clinton foreign policy of regime change wars". This is deeply destructive, she said.

"This is personal to me because I served in Iraq...I served in a medical unit where every single day I saw the terribly high human cost of war. I take very seriously the responsibility that the president has to serve as commander-in-chief, to lead our armed forces and to make sure always -- no, I am not going to put party interest first," she said.

Tulsi Gabbard said she is running for president to be the Democratic nominee that rebuilds the party, takes it out of their hands, and truly puts it in the hands of the people of this country.

"Our Democratic Party, unfortunately, is not the party that is of, by, and for the people. It's a party that has been and continues to be influenced by the foreign policy establishment in Washington, represented by Hillary Clinton, and others foreign policy, by the military-industrial complex and other greedy corporate interests," she said.

Tulsi Gabbard said she wants to make the Democratic Party a party that actually hears the voices of Americans, who are struggling across the country, and put it in the hands of veterans and fellow citizens who are calling for an end to this ongoing Bush-Clinton-Trump foreign policy doctrine of regime change wars and overthrowing dictators in other countries.

"These are wars that have cost us as American taxpayers trillions of dollars since 9/11 alone, dollars that have come out of our pockets, out of her hospitals, out of our schools, out of our infrastructure needs. As president, I will end this foreign policy, and these regime change wars, work to end this new Cold War an arms race, and instead invest our hard earned taxpayer dollars actually into it serving the need," she said.