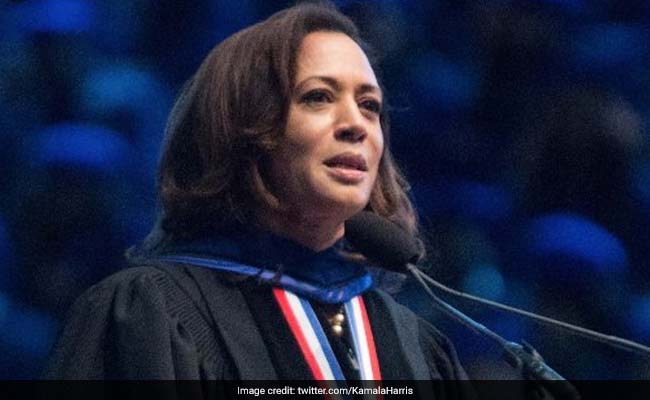 Kamala Harris is the first to announce a plan to allocate funding to teachers.

US Democratic presidential candidate Senator Kamala Harris, who is of Indian and Jamaican descent, has called for allocating a large federal investment to improve teacher salaries nationwide.

"I'm declaring to you that by the end of my first term, we will have improved teachers' salaries so that we close the pay gap," CNN quoted the California Democrat as saying on Saturday in Houston to a group of supporters.

"Because right now, teachers are making over 10 per cent less than other college educated graduates and that gap is about $13,000 a year, and I am pledging to you that through the federal resources that are available, we will close that gap."

Her proposal would be the largest ever federal investment in teacher pay, she said.

As candidates sweep across key battle-ground states testing their economic messages with potential voters, Ms Harris is the first to announce a plan to allocate funding to teachers.

Education occupations have unions that represent more than 37 per cent of employees, according to the Bureau of Labour Statistics, far more than any other occupations.

Though, she didn't provide further details about where the funds will come from, the campaign has said they will unveil the details of the full policy plan next week.

Her proposal also comes during an uptick of teachers' strikes across the country, CNN said.

Teachers have picketed everywhere from blue California to North Carolina.

Teacher salaries nationwide were down compared with recent decades. Adjusting for inflation, they have shrunk 1.6 per cent nationwide between 2000 and 2017, according to data from the National Centre for Education Statistics, which compared the average annual salaries of teachers since 1969.

US wages more generally have risen in that time, according to a Pew review of BLS statistics.

In some states that saw recent strikes, such as Arizona and North Carolina, salaries were down more than 10 per cent before teachers fought for increases

(This story has not been edited by NDTV staff and is auto-generated from a syndicated feed.)
Comments
Kamala HarrisUnited StatesBureau of Labour Statistics