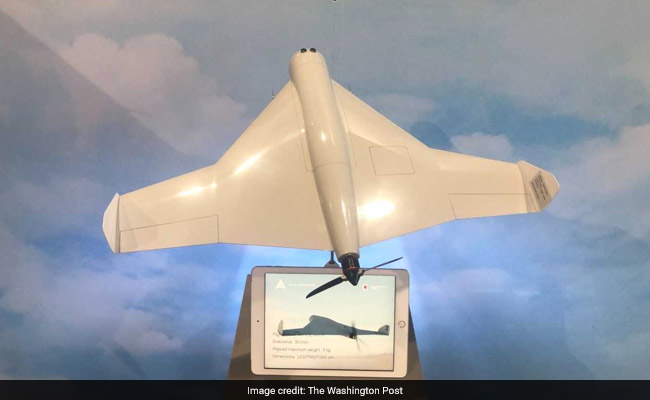 A model of KUB-UAV, a new unmanned combat aerial system made by Kalashnikov Group

The Russian company that gave the world the iconic AK-47 assault rifle has unveiled a suicide drone that may similarly revolutionize war by making sophisticated drone warfare technology widely and cheaply available.

The Kalashnikov Group put a model of its miniature exploding drone on display this week at a major defense exhibition in Abu Dhabi, the capital of the United Arab Emirates, where the world's arms companies gather every two years to show off and market their latest wares.

The tiny item was dwarfed by the tanks, armored vehicles and fighter jets that were also on display. But it has as much potential to change the face of war as its older cousin, the AK-47, widely referred to simply as the Kalashnikov.

With its low price, high efficiency and ease of use, the Kalashnikov rifle became the weapon of choice for revolutionaries and insurgents around the world, empowering disgruntled citizens against their governments in Latin America, Africa and Asia. It remains a potent tool to this day: The Pentagon purchases secondhand Kalashnikov rifles for its allies in Syria and Afghanistan, rather than give them more expensive American-made guns.

The Kalashnikov drone - officially named the KUB-UAV - will likewise be simple to operate, effective and cheap, its manufacturers claim - and just as revolutionary. It will mark "a step toward a completely new form of combat," said Sergey Chemezov, chairman of Russia's state-owned Rostec arms manufacturer, which owns a controlling stake in Kalashnikov, according to Kalashnikov's news statement on the launch.

The KUB is four feet wide, can fly for 30 minutes at a speed of 80 mph and carries six pounds of explosives, the news release says. That makes it roughly the size of a coffee table that can be guided to explode on a target 40 miles away - the equivalent of a "small, slow and presumably inexpensive cruise missile," according to a report by the National Interest website.

Whoever buys one will have the ability to steer a bomb with a high degree of accuracy unparalleled except by some of the U.S. military's smartest bombs, said Nicholas Grossman, a professor of international relations at the University of Illinois and author of the book "Drones and Terrorism."

"I think of it as democratizing smart bombs," he said "It means disseminating smart bombs more widely. This would shrink the gap between the most advanced militaries and the smaller ones."

Suicide drones are not new. The Islamic State pioneered the art of attaching explosives to commercially available drones and detonating them on advancing troops and enemy bases during the battles for the cities of Mosul and Raqqa in Iraq and Syria.

Russian troops in Syria were targeted by the biggest-ever suicide drone assault in Syria last year, when a swarm of more than a dozen crudely assembled devices incorporating explosives and GPS guidance systems descended onto Russia's Hmeimim air base in Syria.

The U.S. and Israeli militaries have incorporated suicide drones into their arsenals - but controls on the export of technology mean the devices aren't shared outside a small circle of close allies.

The KUB drone will be faster and more accurate, and will deliver twice the explosive charge and have a greater range than any of the crude homemade devices that have been patched together by terrorists, according to the Kalashnikov representatives at the exhibition.

And unlike U.S. and Israeli exploding drones, the KUB will be "very cheap," said one of the Kalashnikov representatives. He declined to name the price and spoke on the condition of anonymity because he was not authorized to communicate with the media.

The target market will be "smaller armies" around the world, he said, meaning the availability of the KUB will bypass controls imposed by the United States and its allies that are designed to keep weaponized drones out of the hands of their foes.

The potential for terrorists to use drone bombs to carry out attacks is one of the biggest worries surrounding the proliferation of the technology, experts say. Two such drones were used in an apparent attempt to assassinate Venezuelan President Nicolas Maduro in August. Recent shutdowns of airports in London, Dublin, New York and Dubai due to mysterious drone incursions demonstrate Western governments' lack of readiness to address threats posed by drones, Grossman said.

Terrorists are more likely to continue to improvise their own ways of jury-rigging explosive drones using cheaply available commercial devices and their own bombmaking expertise rather than spend on a ready-made version, said Nick Waters, a former British army officer and drone expert.

The spread of kamikaze drones will also intensify efforts to counter them, Grossman pointed out. "This will definitely enhance the capabilities of various state and nonstate actors, but it's not something that can't be countered," he said.

However, he added, "I'm quite nervous of the capabilities being unleashed without knowing where it will lead."

(Except for the headline, this story has not been edited by NDTV staff and is published from a syndicated feed.)
Comments
KalashnikovAK-47