Julian Assange fears US, says will stay in Ecuadorean embassy 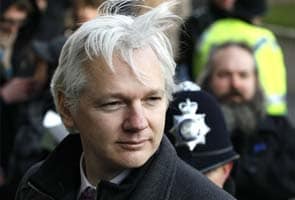 London: WikiLeaks founder Julian Assange says he will not leave the sanctuary of the Ecuadorean Embassy in London even if Sweden stops pursuing sexual assault claims against him because he fears arrest on the order of the United States.

In an interview with Reuters and others to mark the one-year anniversary of taking refuge in the cramped diplomatic building, Assange said he remained hopeful he might be able to leave but offered little evidence to suggest he would be finding new living quarters anytime soon.

When asked whether he would remain inside even if Sweden dropped the investigation against him, Assange said: "That's correct."

Assange chose his words carefully in the interview, which was conducted last Friday under embargo. In a wide-ranging discussion behind drawn white net curtains, Assange hailed Edward Snowden, a former contractor for the US National Security Agency who made revelations about US surveillance programs, as a hero. He also railed against the United States, Britain and his native Australia and talked about his case with semi-legal expertise.

Assange, 41, fled to the Ecuadorean Embassy last June to avoid extradition to Sweden, which wants to question him about allegations of sexual assault and rape, which he denies.

He says he does not want to answer the allegations in person because he believes Sweden would hand him over to the US authorities, who would try him for helping facilitate one of the largest information leaks in US history.

WikiLeaks began releasing thousands of confidential US documents on the Internet in 2010, embarrassing the United States and, according to some critics, putting its national security and people's lives at risk.

As Assange spoke, at least four policemen ringed the embassy.

Assange said he initially thought he might be holed up in the embassy, a diplomatic facility in one of London's swishest areas, for up to two years. In the interview he did say how much longer he expected to stay in the embassy but said his original timetable was still a fair estimate.

But when asked whether he was worried about that the situation could drag on much longer, he conceded it was a possibility.

"Left to its own devices that is a risk, left to fate that is a risk," he said. "There have been other cases, similar deadlocks for political refugees in embassies, that have gone on for dozens of years. However, we don't intend to leave the situation to fate."

Assange, who looked pale, complained of a lack of sunlight, saying there was a risk that people in his circumstances could develop rickets.

He said he worked 17-hour days, exercised to try to keep healthy and currently was working on a song about "the new politics that has come about as a result of the Internet and media distortion" with a popular Latin American musical group.

Promoted
Listen to the latest songs, only on JioSaavn.com
Assange said he never used email but had others read it for him instead.