The shoes were snatched in the dead of night in 2005 from a shattered glass case at the Judy Garland Museum in the late actress's birthplace of Grand Rapids, Minnesota. 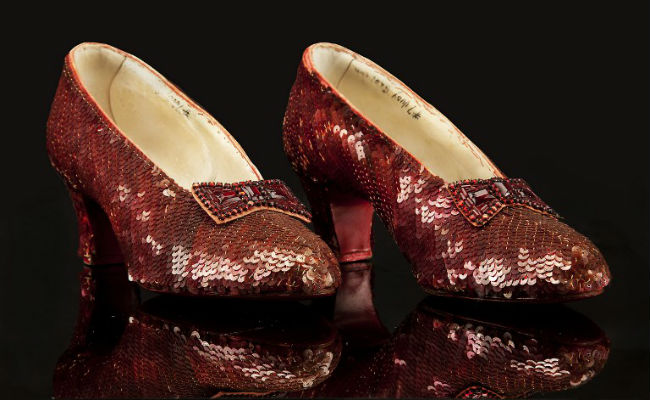 They are the world's most recognizable shoes, but have somehow evaded detection for 13 years since being stolen from a Minnesota museum.

But on Tuesday, the ruby-red slippers worn by Dorothy in "The Wizard of Oz" came home again.

US authorities announced they had recovered the famous sequined shoes -- one of four pairs worn by Judy Garland in the 1939 American classic film.

The shoes were snatched in the dead of night in 2005 from a shattered glass case at the Judy Garland Museum in the late actress's birthplace of Grand Rapids, Minnesota.

A $1 million reward had been offered for their return. But the culprit and the fate of the shoes had remained a mystery.

Authorities shed little light on what happened to the shoes, telling reporters only that they had recovered the famous pair and that there were "multiple suspects."

They unveiled the shoes -- which appeared to be in good condition -- in a glass case.

The Smithsonian Institution's National Museum of American History in Washington -- which has another pair of Dorothy's slippers on display -- authenticated the recovered pair.

Extortion attempt
Ever since the 2005 theft, police in the city of Grand Rapids have received numerous tips, chief Scott Johnson said.

One tip claimed the shoes were nailed to a wall in a roadside diner. Another insisted they were thrown in an iron-ore pit.

"Our police department followed up on each and every lead," Johnson said, adding that it didn't help that countless replicas were in circulation.

But as the trail grew cold, it appeared less and less likely that the shoes would ever be seen again.

The investigation picked up a year ago, when authorities said an extortion attempt was made to the insurance company that had taken ownership claim to the slippers.

Local police contacted the FBI and a yearlong investigation began. The slippers were recovered during an undercover operation in Minneapolis, the FBI said.

"We're not done. We have a lot of work to do," said North Dakota-based US Attorney Chris Myers. "There's information out there that could help this investigation move forward."

Authorities said they wanted to ensure they had accounted for everyone involved in the theft and the subsequent concealment of the slippers through the years.

"Our hope today is that folks that are watching this, if you know something about the theft, something about where these slippers have been in the last 13 years, that you come forward and you share that with us," said FBI agent Jill Sanborn.

The stolen slippers were one of four known surviving pairs used in the film, and worn by Garland as she danced her way down the yellow-brick road.

"They're more than just a pair of shoes," said police chief Johnson. "They're an enduring symbol of the power of belief."