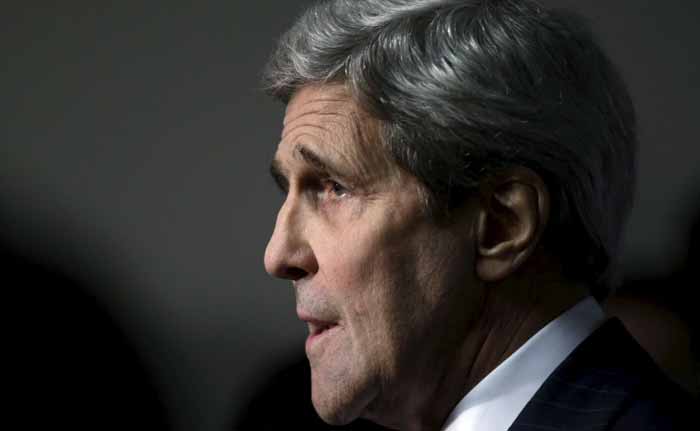 Abu Dhabi: US Secretary of State John Kerry travelled to the Gulf on Monday to stress the urgent need to unite a region riven by conflict against the threat from the jihadist Islamic State group.

Kerry believes his ambitious plan to bring Syria's other warring parties to the negotiating table is the key to isolating and ultimately defeating the IS extremists.

So he came to Abu Dhabi to encourage his Emirati and Saudi allies in their efforts to convince Syria's rebel factions to agree a ceasefire with Bashar al-Assad's regime.

"That's why I'm here," he told reporters, repeating his hope that a ceasefire between the opposition and the government could be struck "in a few weeks".

"We're working very hard to accelerate the efforts out of Vienna, to give that diplomatic process life," he said.

"You can be confident that the diplomatic front is in high gear, with a very real plan on the table to be implemented."

Last month, 17 nations plus the United Nations, Arab League and European Union met in Vienna to set a framework for a ceasefire and peace talks to halt Syria's civil war.

Later, Saudi Arabia's Foreign Minister Adel al-Jubeir joined Kerry and Sheikh Abdullah to brief them about his outreach to the Syrian opposition.

In the wake of the November 13 attacks in Paris and the security scare in Brussels, fears are rising that IS is gaining in strength and reach.

France's President Francois Hollande is due in Washington on Tuesday to lobby President Barack Obama to focus US military and diplomatic firepower on the group.

Russia's Vladimir Putin says his forces are already doing this, dismissing Western and Arab concerns about Assad's rule as a distraction from the main fight.

But Washington thinks it can quickly launch a peace process designed to sideline Assad and build a stable Syria while still leading a military coalition against the jihadists.

"While there are still foreign fighters trying to get to Syria, there are literally thousands, tens of thousands that have been stopped," Kerry said.

He said IS funding from oil exports was being cut off and that the group has lost 25 percent of its territory in its heartland of eastern Syria and northern Iraq.

And now, US special forces are preparing to deploy into Syria to help local groups battle IS.

The Vienna powers have set an ambitious target date of January 1 for talks and a ceasefire to begin, but the participants have yet to be identified.

Saudi Arabia, which supports some of the Sunni rebel forces on the battlefield, has taken charge of assembling a motley coalition of opposition exile groups and armed factions.

Kerry was keen to hear from Jubeir how this process is going and whether the key players would be ready for the January 1 target date for talks to begin.

These would exclude IS and the Al-Qaeda affiliated Al-Nusra Front.

However, they could draw in groups such as Al-Nusra's powerful Islamist ally Ahrar al-Sham.

The hope is that if a broad enough "moderate" opposition coalition can enter peace negotiations with Assad's loyalists, a path to a political transition can be found.

Meanwhile, the various local and international armies which have been drawn into the conflict will focus their fire on hardline jihadists like IS.

Asked whether Washington was under pressure from European allies to work with Russia against IS, Kerry said some of them "were wondering whether it was possible".

"And," he added, "under the right circumstances the answer is 'yes', it's possible, but we need to get the political process moving, we're weeks away, maybe one or two weeks."

But he warned that if "certain entities" think that by working with Russia the United States is helping Assad cling to power, that would imperil efforts to get Sunni rebels to the table.

"And then you'll have greater support going to bad actors which ultimately could fuel greater growth in Nusra and Daesh," he said, using an Arabic term for IS.

After Monday's one-day stopover in Abu Dhabi, Kerry was to head on to Israel and the Palestinian territories on Tuesday for talks on an upsurge of violence there.