US President Joe Biden, a devout Catholic, supports the landmark 1973 US Supreme Court decision affirming a woman's right to an abortion. 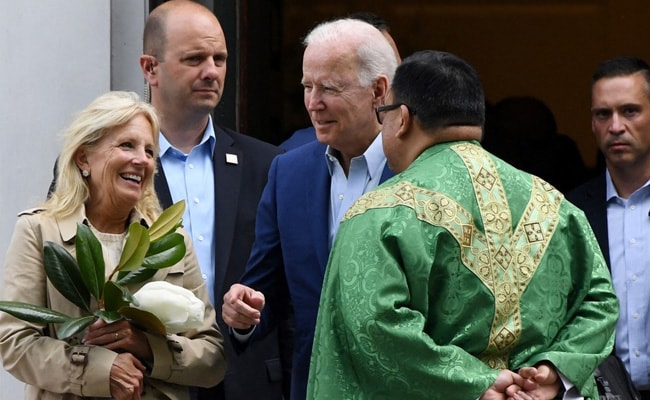 In 2019, a priest had refused holy communion to Joe Biden because of his stance on abortion.

President Joe Biden went to church Saturday in his hometown a day after US Roman Catholic bishops issued a challenge to him over his support for abortion rights.

Biden, 78, is a devout Catholic who attends mass at least once a week, and he supports the landmark 1973 US Supreme Court decision affirming a woman's right to an abortion.

On Friday, US bishops agreed to draft a statement on the meaning of holy communion which could potentially be used to deny that sacrament to the American leader.

The eucharist, also known as holy communion, is among the most sacred rituals in the Catholic Church and there have been calls from some conservative church leaders to deny the sacrament to politicians who support abortion rights.

Biden on Friday seemed to dismiss the possibility that he could be denied communion.

"That's a private matter and I don't think that's going to happen," he told reporters.

It is up to each local bishop to decide who receives communion in their diocese.

In 2019, a priest at a Catholic church in South Carolina refused holy communion to Biden because of his stance on abortion.

The Catholic News Service reported in May that the Vatican had warned US bishops to proceed cautiously with policies designed "to address the situation of Catholics in public office who support legislation allowing abortion, euthanasia or other moral evils."