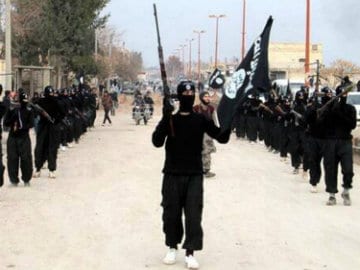 Fighters from the al-Qaida linked Islamic State of Iraq and the Levant (ISIL).

Beirut: Jihadists from the Islamic State group killed at least 50 Syrian soldiers in an ambush on Friday, summarily executing most of them after their capture, a monitoring group said.

The assault in Raqa province, the IS jihadists' Euphrates valley stronghold, came amid their fiercest assault yet on Damascus-held territory.

The deaths added to 74 already killed in the offensive across the north and northeast, the Syrian Observatory for Human Rights said.

"At least 50 soldiers were ambushed, some of them were killed in fighting but most of them were beheaded," director Rami Abdel Rahman told AFP.

IS militants claimed the toll was as high as 75.

"Allah be praised, 75 soldiers of the 17th division were captured at Abu Shared and they were beheaded," one sympathiser tweeted.

Media close to the regime remained silent on the deaths.

The 17th division is one of three still holding positions in the IS-occupied region and operates out of a vast military base.

On Friday, the army repositioned the 17th division, the Observatory said, without giving further details.

It is the first stand-off of this magnitude between IS and Syrian government forces, with the jihadists intent on "cleansing" the territories it controls of the regime presence, the Observatory said.

The IS, which proclaimed a "caliphate" in an area spanning the Syrian and Iraqi borders in June, controls swathes of land in both countries and is seeking to extend its power and influence.

The fighting between IS and Syrian government forces, which erupted on Thursday, has left 69 dead on the regime side, including the 50 soldiers, and killed 28 jihadist fighters, the Observatory said.

The jihadists went on the offensive near the main northern city of Aleppo, in Hasakeh province in the northeast and in Raqa province around their Euphrates valley stronghold, the Observatory had said.

Elsewhere, in Idleb in the northeast of the strife-torn country, a religious court linked to a Syrian rebel body sentenced two men to death for allegedly bombing the two main border crossings with Turkey, as well as a mosque in the town of Binnish.

The men were accused of carrying out attacks on the Bab al-Hawa and Bab al-Salam crossings between Syria and Turkey.

The "court" was run by the Islamic Front, one of the Syrian rebel groupings that is battling both the IS and the government, and it said the men had "admitted acting on behalf of the regime".

A video published by the Observatory showed the two men being shot dead in front of a crowd.

The head of the United Nations Commission of Inquiry on Syria, meanwhile, said IS fighters are expected to be added to a list being drawn up of possible war criminals.

"They are good candidates for the list," said Paulo Pinheiro, who briefed the UN Security Council on the results of the inquiry on Friday.

"I can assure you that we are collecting information on perpetrators from all sides including non-state armed groups and ISIS," he told reporters.

"I am not in a position to say who is winning the World Cup of human rights violations. Both sides are doing horrific things and they will continue if there is no accountability."

Promoted
Listen to the latest songs, only on JioSaavn.com
Set up in September 2011, the Commission of Inquiry has collected witness accounts, satellite photographs and other documents to build up its caseload of human rights violations, although none of the members have travelled to Syria.