A social media account in Jiangxi province's Yugan county said villagers had "willingly" removed 624 posters showing Christian religious sayings and images, and replaced them with 453 images of Chinese President Xi Jinping. The move, while still on a small scale, harks back to the personality cult surrounding Communist China's first leader Mao Zedong, whose picture was in every home. 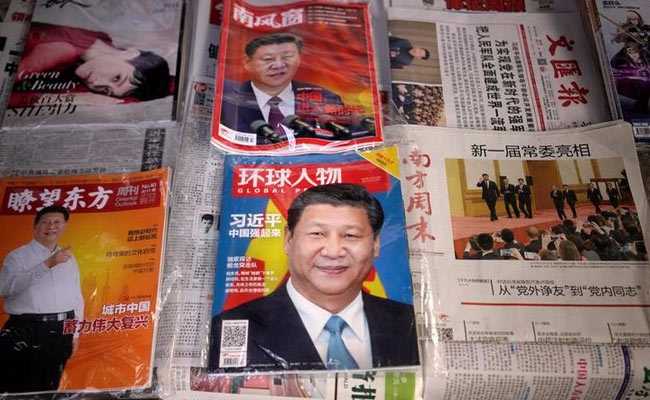 Beijing: Jesus Christ won't drag you out of poverty or cure your illnesses, but the Chinese Communist Party will, so take down those pictures of Christ and put up a nice photograph of President Xi Jinping.

That's what thousands of villagers in southeastern China have been told by local officials, in a sign of the growing cult of personality around the country's powerful leader, as well as rising pressure on Christian worship.

A social media account in Jiangxi province's Yugan county said villagers had "willingly" removed 624 posters showing Christian religious sayings and images, and replaced them with 453 images of Xi. The move, while still on a small scale, harks back to the personality cult surrounding Communist China's first leader Mao Zedong, whose picture was in every home.

In the latest campaign, party members involved in poverty alleviation had toured villages telling people how the party was supporting agriculture and removing poverty, "melting the hard ice in the hearts of religious believers" and "helping turn them into believers in the party."

Qi Yan, chairman of the people's congress in the township of Huangjinbu within Yugan county, and the man in charge of the local poverty alleviation effort, told the South China Morning Post that villagers "should no longer rely on Jesus, but on the party for help."

"Many poor households have plunged into poverty because of illness in the family. Some resorted to believing in Jesus to cure their illnesses," Qi said. "But we tried to tell them that getting ill is a physical thing and that the people who can really help them are the Communist Party and General Secretary Xi."

Qi said the campaign had been running since March in Huangjinbu township, with more than 1,000 portraits of Xi distributed and hung in homes. Christians make up around one-third of the population there, with between 5,000 and 6,000 families, he said.

"Many rural people are ignorant. They think God is their savior," he said. "After our cadres' work, they'll realise their mistakes and think: we should no longer rely on Jesus, but on the party for help."

In October, officials in Yugan county held a meeting where they talked about "having a sense of crisis" about the presence of religion there, according the county's official website. Country party secretary Hu Wei said they must insist on "uniting people of faith around the party."

A resident of another township in Yugan, a man surnamed Liu, told the South China Morning Post that villagers had no choice but to comply.

"Some families put up gospel couplets on their front doors during the Lunar New Year, some also hung paintings of the cross. But they've all been torn down," he said. "They all have their belief and, of course, they didn't want to take them down. But there is no way out. If they don't agree to do so, they won't be given their quota from the poverty-relief fund."

China's constitution protects the right to religion, but the state also takes a dim view of any institution that might challenge its total control over society. So Christians, Buddhists, Muslims and others have the right to worship, but their houses of worship are often tightly controlled and can easily be shut down if deemed distracting or a threat to official dogma.

More than any other time in decades, the party is now seeking more control. At last month's Party Congress in Beijing, Xi Jinping was granted another five years in power as general secretary, and elevated almost to the level of Mao in the Communist pantheon, with his name written into the party constitution. Critics say it spells a dangerous return to one-man rule in China, something that had disastrous results under Mao.

During his speech at the congress, Xi himself said religion must be guided by the party to adapt to socialist society.

A local newspaper in the southwestern province of Guizhou is already referring to Xi as "Great Leader" in a headline, a title that hasn't been used since Mao's era.

"A local newspaper in Guizhou describes #XiJinping as #GreatLeader, appellation not used since #Mao...

"The cult of personality lives...

Meanwhile, Xi's slogans are almost ubiquitous in China, since the run-up to and aftermath of the Party Congress, including, "Stay true to the mission and keep it firmly in mind."

"Even at pro basketball games in China Xi Jinping's propaganda slogans are ever present.

Promoted
Listen to the latest songs, only on JioSaavn.com
Amber Ziye Wang contributed to this report.