Shinzo Abe and Xi Jinping met in Beijing ahead of flying to the southwestern city of Chengdu to join a trilateral meeting. 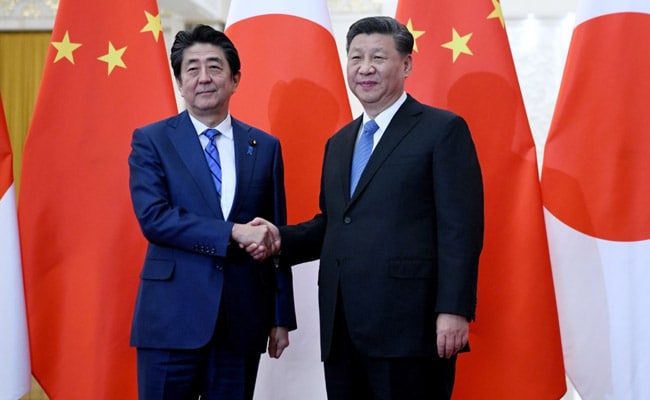 Shinzo Abe and Xi Jinping talked on North Korea and the denuclearisation, an official said

Hong Kong should "continue to be free and open", Japanese Prime Minister Shinzo Abe told the Chinese president on Monday, as the city is rocked by months of pro-democracy protests.

Abe met with Chinese President Xi Jinping in Beijing ahead of flying to the southwestern city of Chengdu to join a trilateral meeting Tuesday, which will also be attended by South Korean President Moon Jae-in.

In a press briefing after the Xi-Abe meeting, Otaka Masato- spokesman for the Japanese minister of foreign affairs- said Abe "urged China to continue its self-restraint" over Hong Kong and expressed "hope for an early resolution of the situation".

The two leaders also discussed North Korea and the denuclearisation of the Korean peninsula, the spokesman said, and Xi "asked for support" for a joint China-Russia draft UN resolution which proposed easing sanctions against the nuclear-armed state.

"Mr Abe reiterated that he is very much concerned about the situation...(and) mentioned that under the 'one country, two systems', Hong Kong should continue to be free and open and to be able to enjoy its development," said Otaka.

China runs Hong Kong on a "one country, two systems" model which allows the financial hub key freedoms that are denied people on the authoritarian mainland.

Many Hong Kongers fear an increasingly assertive China is already eroding those freedoms.

According to the Japanese spokesman, Xi replied to Abe's comments on Hong Kong by repeating China's position that Hong Kong "is a domestic matter".

Abe also pressed the Chinese president on human rights in Xinjiang, according to the Japanese spokesman, and said he "hopes to see the Chinese government explain itself with transparency regarding the situation".

China has faced international condemnation for rounding up an estimated one million Uighurs and other mostly Muslim ethnic minorities in internment camps in the northwestern region of Xinjiang.

On North Korea, Otaka said Tokyo felt it was too soon to consider lifting sanctions.

Pyongyang is under heavy US and United Nations sanctions over its nuclear programme, but it has been frustrated at the lack of relief after it declared a moratorium on nuclear and intercontinental ballistic missile (ICBM) tests.

"Our position is that it is too early for any lifting of the sanctions at this moment considering what's happening around North Korea these days," said Otaka.

(Except for the headline, this story has not been edited by NDTV staff and is published from a syndicated feed.)
Comments
Shinzo AbeXi JinpingHong Kong Protests