Japan's Baby Hatch - Where Children Have Been "Safely Abandoned" For Years

For 15 years, the clinic has been the only place in Japan a child can be anonymously and safely abandoned. 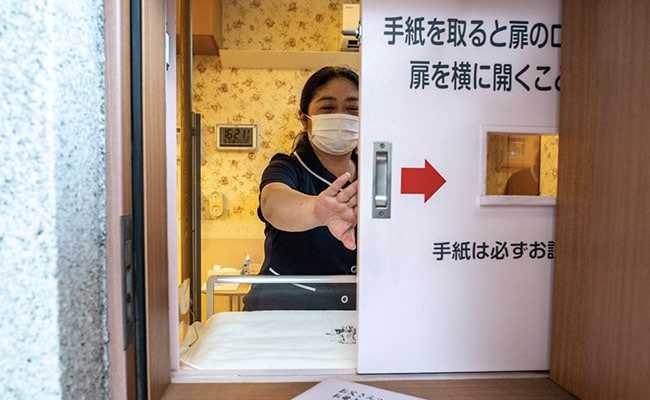 Jikei hospital sees the hatch as a way to prevent child abuse and deaths in Japan.

When the alarm sounds at Jikei hospital in southern Japan, nurses race down a spiral staircase. Their mission: to rescue an infant left in the country's only baby hatch.

For 15 years, the clinic has been the only place in Japan a child can be anonymously and safely abandoned.

The pioneering hospital in the Kumamoto region also offers a 24/7 pregnancy support hotline and the country's only "confidential birth" programme.

These have made it the target of criticism, but head doctor Takeshi Hasuda sees the facility as a vital safety net.

"There are women out there who are ashamed that they did something horrible (by getting pregnant) and are so scared," he told AFP. "For these women, a place like ours that bars no one and makes them think 'even I will be welcome' counts a lot, I think."

Nurses try to arrive at the hatch, with its stork illustrations and meticulously tended baby bed, within a minute of the alarm sounding.

"If we find mothers lingering nearby, we ask if they're comfortable sharing their stories with us," said hospital staffer Saori Taminaga.

They offer to check the health of mothers, providing support and encouraging them to leave information that could help a child learn their origins later.

"If they try to go, we persist and keep pushing until just before they leave the grounds. Once that happens, it's time for us to give up."

The Catholic-run hospital opened its baby hatch in 2007, modelled on a German scheme.

Baby hatches have existed globally for centuries and are used today in places including South Korea, Pakistan and the United States.

They have been banned in some countries, such as Britain, and criticized by the UN for violating a child's right to know their parents and identity.

Jikei hospital sees the hatch as a way to prevent child abuse and deaths in Japan, where police recorded 27 child abandonments in 2020 and at least 57 children died from abuse the year before.

Hasuda says children abandoned at the hospital include those who were "the result of prostitution, rape and incest", with mothers finding nowhere else to turn.

"I think the most important role our baby hatch system has played so far is to provide a sort of last resort for women left alienated by society," he said.

In all, 161 babies and toddlers have been dropped at the hospital -- with some coming from the Tokyo region, about 1,000 kilometres (621 miles) away, and beyond.

The hatch has also faced scepticism in Japan, partly because of traditional ideas about what constitutes a family, according to Chiaki Shirai, an expert on reproduction and adoption studies at Shizuoka University.

The country uses a registration system that lists births, deaths and marriages in a family going back generations. The crucial piece of administrative data also shapes views on family structure.

It has "entrenched the idea in Japanese society that whoever gave birth to a child must raise the child," to the point where children are almost considered "the property" of parents, Shirai told AFP. "Children who are abandoned and shown as having no family in the registry are heavily stigmatised."

Despite the anonymity offered by the hatch, child welfare officials typically try to trace the family of infants abandoned at the hospital.

As a result, around 80 percent later learned their family's identity, and 20 percent have returned to parents or relatives.

'It's all your fault'

Jikei hospital has expanded the services it offers marginalised women, adding a "confidential birth" programme to a pregnancy hotline that fields thousands of calls a year.

Two babies have been delivered under the programme, which the hospital says is intended to discourage risky, solitary deliveries at home.

Both mothers told the Jikei they had been abused by their parents and wanted their children to be put up for adoption, Hasuda said.

Under the scheme, a mother's identity is revealed to a single staffer and kept confidential for possible disclosure to the child later on.

The programme has also faced opposition -- and while the government has not declared it illegal, it has baulked at legislation to formalise it.

Shirai said women who resort to confidential births or the baby hatch face judgement for not choosing other options, including abortion.

"'You could have chosen an abortion but didn't. Now it's all your fault' is the kind of sentiment," she said.

Abortion has been legal in Japan since 1948 and is available up until 22 weeks, but consent is required from a male partner. Exceptions are granted only in cases of rape or domestic abuse, or if the partner is dead or missing.

Hasuda, too, feels society often prefers to blame women rather than help them.

"Society's motivation to sympathise with them or help them out seems to be low, if not completely non-existent," he said.